Taposé To Bring Microsoft’s Courier Like Experience To iPad

We’re sure everyone remembers the Microsoft Courier, the much-anticipated though ultimately cancelled dual-screen tablet. The idea was an intriguing one – two screens and an operating system that utilized both pen and gesture inputs. It was funky, but Microsoft said they could never put it into production and a little bit of every geek on the planet died along with it. If only our iPads could recreate some of that magic. 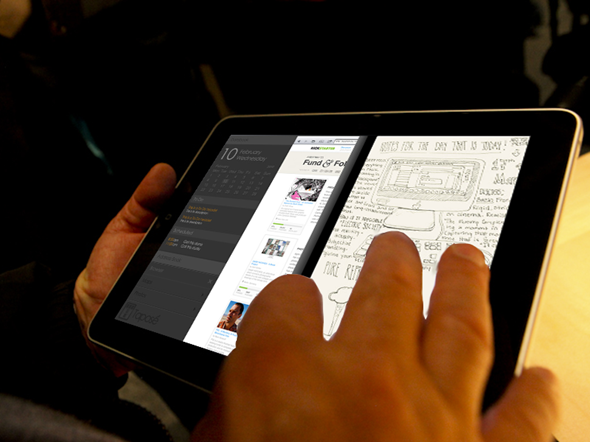 Created as a Kickstarter project by Benjamin Monnig and Ricky Drake, Taposé takes the idea of Courier’s dual-app wielding multitasking and brings it to the iPad. In the words of its creators:

The creativity, productivity and attractive user interface coalesce into one outstanding product. The ingenious split interface design allows users to interact with multiple apps simultaneously in the company of Taposé collections.

Using Taposé brings such loveliness as drag and drop to Safari and dragging addresses to Maps as well as using the middle separation bar as a temporary dumping ground for all kinds of media.

Head on over to Kickstarter to show your support – a $10 pledge gets you a copy of Taposé upon its release so it’s a win-win!