Amongst all smartphone platforms, Android holds a certain appeal to power users. This is because none of its competitors offers the level of control and customization for that technologically elite crowd that Android puts on the table. From cooking custom ROMs based on a stock one, to concocting an entirely new mix from AOSP, to the likes of hybrid creations like the famous ParanoidAndroid series, which has now extended to a large number of devices, there’s always something for everyone in Google’s mobile operating system. Then, there’s that other kind of control – the one that lets the user play around with things like battery longevity, and factors associated with it. Among those, control over CPU is of great importance. Why? Because next to the screen, there’s nothing as bad as an over-hungry CPU drinking through your battery juice in a matter of mere hours. Don’t believe me? Ask someone who’s faced the recent bug with CM10, where the device didn’t go into deep sleep!

There’s no shortage on the Play Store of apps that offer a variety of control over your smartphone’s CPU frequency, governor, voltage and other important areas. The one that I am introducing today – CPU Adjuster – doesn’t offer anything that isn’t already available in the likes of SetCPU, but is merely an alternative – and a good one, at that – to the current players. The app works on both rooted and non-rooted phones, although for the latter, it only shows CPU information, and nothing more. 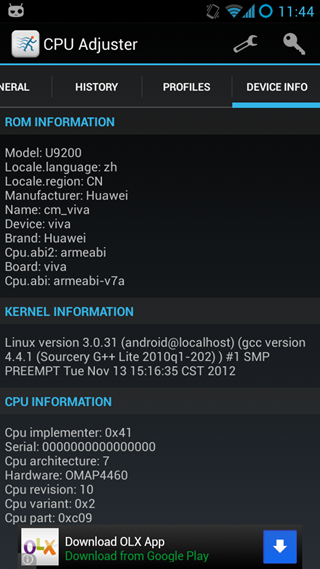 For rooted users, there are plentiful parameters that can be ‘adjusted’ to your need. For instance, you may configure the CPU governor, set minimum and maximum CPU frequencies, play around with Undervolting, manipulate the I/O scheduler, tweak GPU frequencies and set charger voltages. Some of these parameters, of course, are dependent of whether the kernel that you’re using supports them or not. 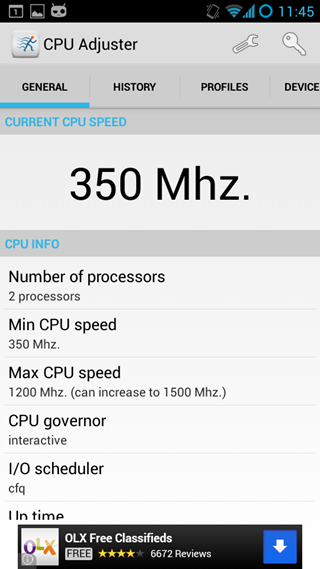 Another different aspect of CPU Adjuster is the ability to create different profiles, which get auto-triggered at events like low battery, high device temperature, screen on/off, USB connection established etc. These profiles let users quickly jump between one set of settings to another, based on the current usage pattern of the phone. The application may be set to start on boot, so you can rest assured that your configured settings will always jump into action, when needed, without requiring any intervention from your side. 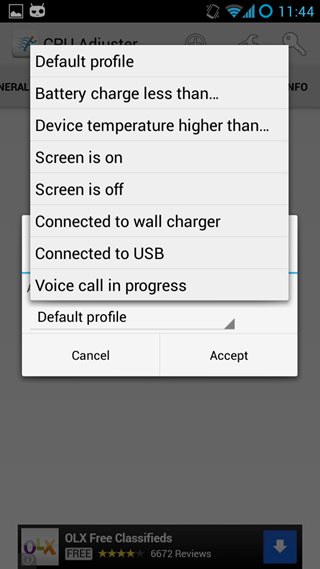 CPU Adjuster comes in both free & paid flavors, with the limitation of the free version being ads, ability to set up only 3 profiles, and no backup for settings. The application is worthy of a try, although be advised, it’s suited only to advanced users. If you don’t know what these settings mean, better do some reading first rather than ending up with a damaged device.