Survey Shows 82% U.S. Teens Would Opt For An iPhone Over Its Competition

Apple’s iPhone is still the must-have accessory for teenagers as proven by new numbers investment firm Piper Jaffray for the fall edition of its semiannual U.S. teen survey.

According to the numbers collected by the firm, a staggering 78% of teens questioned already own an iPhone of some description, which is up 2% when compared with the same report that was collated earlier this year.

On top of that very interesting statistic, 82% of those questioned said that their next phone would be an iPhone rather than something offered by competitors such as Google, Samsung and LG. That number is the highest that Piper Jaffrey has ever come across in any of the previous surveys of this ilk. The increased interest for the current iPhone lineup, or perhaps future iPhones, is likely due to the recently released iPhone 8 and iPhone 8 Plus and more importantly the as-yet unreleased iPhone X. With its TrueDepth camera, super-fast CPU and a new Home button-less design that certainly captures the imagination, the next evolution of the iPhone design is definitely catching the eye of technology and smartphone enthusiasts.

It stands to reason that the teen market would be no different.

Other interesting numbers to come out of the survey have the Apple Watch proving popular. 17% of those questioned said that they plan to buy an Apple Watch in the next six months, up from 13% earlier this year. Apple Music is also doing well, according to the numbers, with the music streaming service gaining market share alongside Spotify. 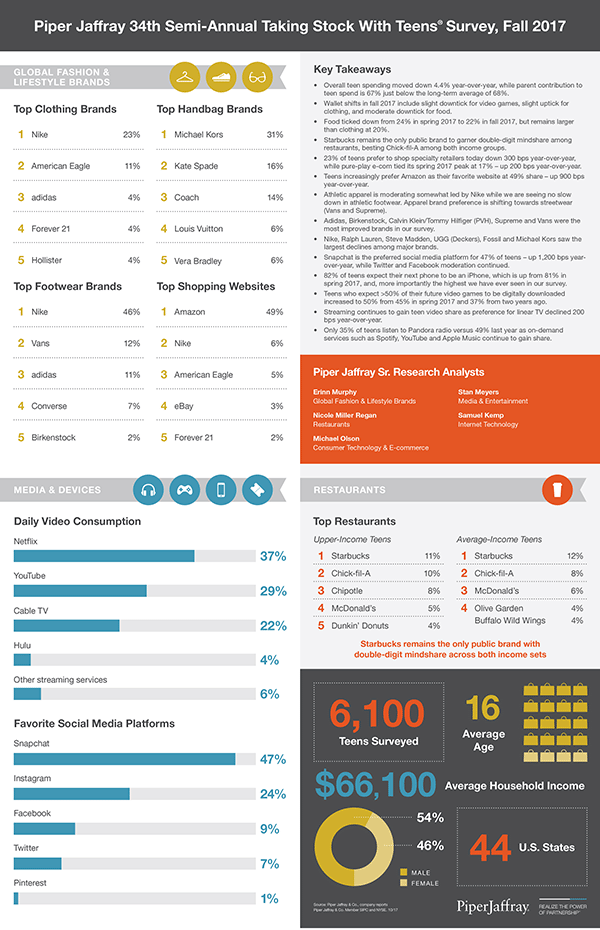 The numbers come out of Piper Jaffray’s fall 2017 teen survey, which consisted of 6,100 teens across 44 states in the United States with an average age of 15.9 years.