Yoink, the popular drag and drop app for the Mac now has a new iOS version after developer Eternal Storms made it available on the App Store.

In its iOS incarnation, Yoink acts as a shelf on which files and other content can be stored, ready to be easily accessed later. 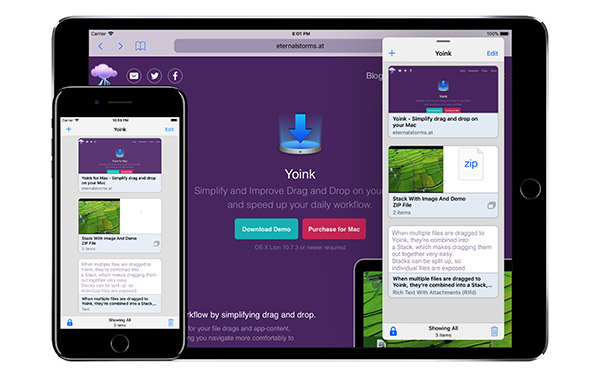 Because of the way Yoink works, it is best suited to being used in either Slide Over or Split View on an iPad, with almost anything that can be dragged and dropped within iOS also being something that Yoink itself can accept and store. Getting things into Yoink is easy even if you do not go the drag and drop route, with there also being a share extension for those who want to take content out of apps that way. Yoink can also take the contents of the clipboard into its care.

When content and files are in Yoink, the app will try to generate a smart preview of it. This predictably works best with URLs and maps, although files also receive a preview if available. It’s also worth noting that the iPhone app does not support the drag and drop element thanks to the fact Apple’s smartphone does not support drag and drop between different apps as part of iOS 11, though hopefully, Apple will right that wrong in due course as drag and drop between same apps does work on iPhones running iOS 11.

Yoink can be downloaded right now from the iOS App Store and costs $2.99. The regular price will be $4.99, though, so if you are going to download Yoink, then we suggest you do it right now to avoid missing out on the introductory price.

If you’re reading this too late, then the $4.99 is still a steal if Yoink is the kind of app you’ve been hunting for. The macOS version of the app can be had for $4.99 for a limited time – the price for the same is normally $6.99.

(Download: Yoink for iPhone and iPad on the App Store)