A leaked photo over at 9to5mac show what appears to be a guy holding an iPhone, only it doesn’t look to be any of the models that have been released by Apple thus far. The image was sent in by a tipster who believes it was the iPhone 5, but the pictures he managed to capture "just didn’t do it justice".

As I’m sure you’ll agree – an understatement indeed. The guys over at 9to5mac seem pretty sure the guy saw a prototype iPhone 5. The tipster had initially thought the device was some kind of fake product until he got home and saw the recent images depicting alleged cases of the forthcoming smartphone. He did the math and surmised that the phone he saw would fit perfectly into the cases he’d seen doing the rounds on the internet – something of which he cannot possibly be sure of. 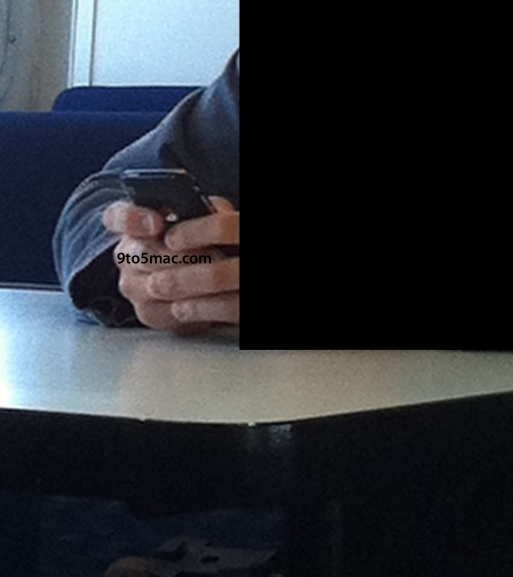 The story does manage to salvage a slight air of legitimacy, though. The tipster is no stranger to Apple’s iPhone series – he is an iPhone 4 owner and previously had a 3GS so you’d expect he knows this stuff.

The device appears to have a cover on it as the buttons are quite clearly indented. With that in mind, it is impossible to ascertain whether this is even an Apple creation or just a phone in a case with an Apple logo on.

Another interesting bit which the tipster noticed was that the device had a larger screen, something which we’ve been hearing about for a long long time.

It does correlate with the current consensus that the new iPhone model will be radically redesigned with a curved back, as opposed to the previous notion that it would be very iPhone4-esque. Unfortunately the tipster was unable to see the home button which has been said to be undergoing augmentation.

Traditionally, the closer we get to the actual announcement and subsequent release, the iPhone fever takes a stronghold and the leaks and prototypes seem to be a lot closer to the final representation of the product. One strongly suspects that this isn’t the case here, though.

We are fast approaching the home straight of the anticipated September release, so expect many more twists and rumors before Jobs sets the record straight.