Skyfire VideoQ: A Nifty App To Watch Flash Videos On Your iPhone, iPad And iPod touch

iOS is loved by many for a whole slew of reasons, but there’s one thing many users would like to have on their iOS device: Flash, something which Apple has refused to implement for years. While such a move has contributed to the transition to web standards away from proprietary plugins, many would still love to watch Flash video from within iOS. There’s now yet another way to go about it through a a new app known as Skyfire VideoQ. Wondering how it works? Read on. 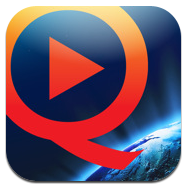 Long-time iOS users have likely heard of Skyfire, an alternate browser for Apple’s operating system that among many things allows Flash video playback from right within the browser, without the actual Flash add-on. This is achieved by decoding the Flash content on Skyfire’s own servers and then streaming it back to your iPhone, iPad or iPod touch in real time, effectively playing back much of the Flash content that’s available on the web rather effortlessly. Skyfire VideoQ is a completely separate application for those who want Flash playback without the need to install a whole different browser. 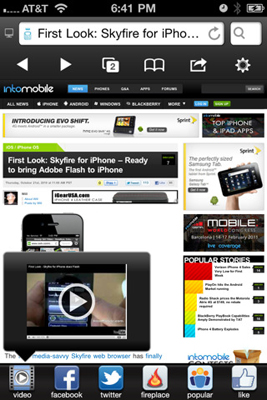 In order to play a file back through Skyfire VideoQ, users simply need to send a link to the desired video’s page from Safari or any other popular browser, by selecting the said link and choosing the “Mail Link to this Page” option, and send it over to video@skyfire.com. The desired video will then be converted on Skyfire’s servers and be available for playback on the VideoQ app within a few minutes. Videos from major sites can be played this way, including professional content sites such as Hulu, Comedy Central and more being constantly added every day.

VideoQ also includes a “Hot” section for popular videos, as well as several categories known as “channels” featuring videos geared towards a specific subject, such as technology, sports and humor. 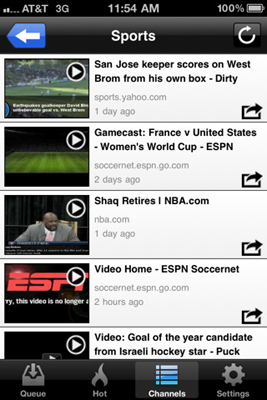 In order to use Skyfire VideoQ, the user is first required to register with their e-mail address. The registration process itself is rather simple and takes no more than a few minutes. Some users might not feel comfortable with revealing their email addresses, but there’s nothing pointing to their illegitimate use on Skyfire’s part who are known for nothing more than developing really cool iOS apps. 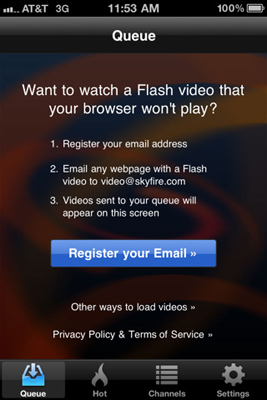 Expect video playback to be of somewhat low-quality since all videos are converted rather quickly up on Skyfire’s services. Yet, low-quality playback is still better than no playback at all.