Sony: A Digital Download-Only PlayStation (4) Console is Over Ten Years Away From Now

Sony has always been a avid supporter of using top of the line physical storage media for their devices, for instance the PlayStation 2 was the first console with DVD drive, the killer feature of PlayStation 3 has always been the Blu-ray drive and the first-gen PlayStation Portable brought the new UMD media format. But recently, Sony killed UMD format with the PSP-Go in favor of distributing media over their online PlayStation Store. This obviously raised a lot of questions whether Sony will take PSP-Go like route for the next-gen PlayStation 4. Well apparently, this might not be the case after all. 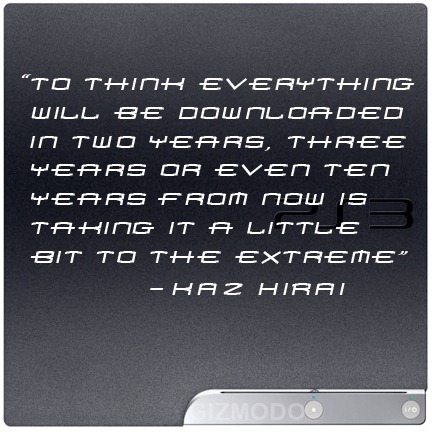 Although digital distribution seems to be the future for games, movies and music, but Sony currently has no plans to adopt this strategy. Sony’s CEO Kaz Hirai recently told MCV today:

To think everything will be downloaded in two years, three years, or even ten years from is taking it a little bit to the extreme.

digital future is over ten years away.

So you have got your answer there! PlayStation 4 which is rumored for a release between 2012 and 2014 will not be a digital download-only console. It will still primarily rely on a physical media like Blu-ray discs. This in contrast is a very totally different strategy on what Sony’s closest rival Microsoft has with their Xbox 360 and Xbox LIVE. [via Gizmodo]