I use my smartphone when I’m about to sleep / about to wake-up and, in this case, the device thinks that it’s being used in landscape orientation but it really isn’t. In other cases, I’ve found that the built-in sensor is far too sensitive so that it switches between landscape/portrait orientation when it shouldn’t.

I don’t know about you, but this is why I strictly believe in keeping portrait orientation lock ON.

This isn’t the perfect solution, obviously, as there are apps out there which require orientation lock to be OFF to work properly e.g. the built-in camera app.

Keeping that in mind, users have two final ways to get the best of both worlds: use an enabling/disabling widget or use an app like Shake n Rotate. Check it out after the jump.

Developed by Andrea Baccega, Shake ‘n Rotate is an app for Android devices which enables/disables auto-rotation when you shake your device. That’s really all it does and it does it well.

Consider the situation where you open your Camera app to take a photo in landscape orientation but you realize that Auto-Rotate is set to OFF. Because of this, your photograph will be taken as if the device is in portrait orientation. To enable Auto-Rotate, you would have to dig deep into the settings menu. 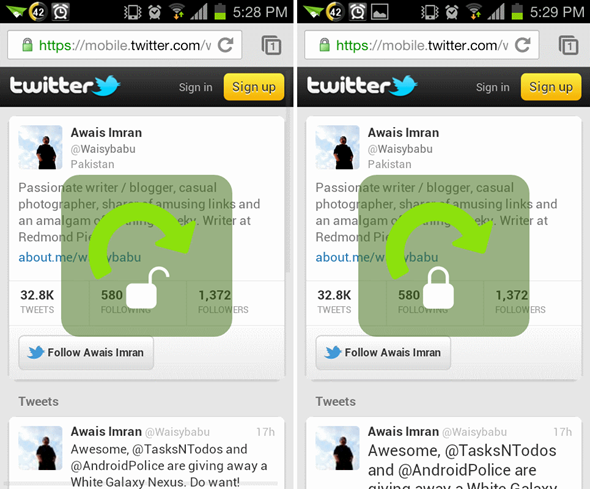 Instead of doing that, you can enable Auto-Rotate by simply shaking your device. Pretty useful, huh? From the configuration settings, you can set the sensitivity of the app, set the app to start on boot and enable/disable notifications for the app.

Shake ‘n Rotate is available for free [Google Play]. If you like the app, don’t forget to buy the developer a free cup of coffee[Google Play] from the option available in the main menu.

Don’t forget to let us know of your impressions of this amazingly useful app by leaving a comment over on our Facebook and Google+ page!