iPhone and Android users are probably aware of Landscape mode, a feature that automatically adjusts apps when users turn the phone sideways. However, on the Android platform, some apps just don’t look good turned sideways. Thankfully, there’s Smart Rotator, which allows you to set which installed Apps will rotate. 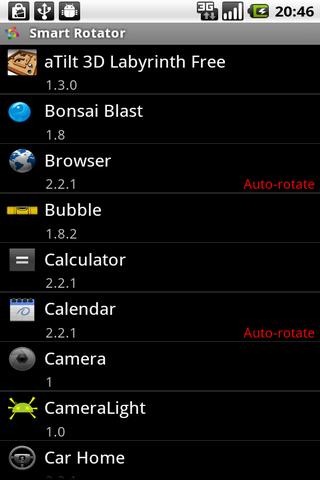 In order for this tweak to function, first you need to disable auto-rotate from your OS settings. You can do that by accessing the system settings, heading over to "Display" and unchecking "Auto-Rotate Screen".

After launching the App, you’ll see a list of all the Apps you have installed, which can be either huge if you’re a power user or quite manageable if you’re a regular human. You’ll then have to spend the next few minutes setting which Apps you’d like to auto-rotate. Doing so is easy: just tap on the app’s name and choose "Turn On" on the menu that will pop up. You can disable auto-rotate by hitting "Turn Off" instead. Apps with auto-rotate enabled will have a text indicator next to the app’s name. 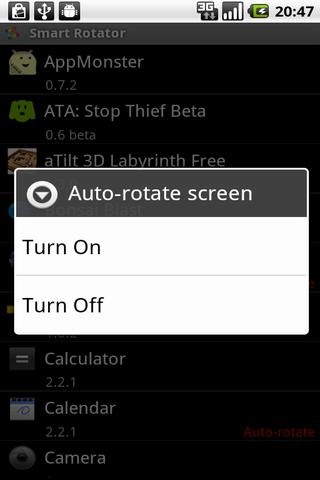 This application has several problems: first of all, there’s no way to search through the huge list of apps it may display, you can only scroll through them, which can be hell if you have a lot of apps. But maybe more importantly, this system works on an opt-in basis, meaning you need to select which apps you want to enable landscape mode on, which can be an incredibly time-consuming process. There’s no master setting which would allow all apps to use landscape mode, except those selected by the user, it only works the other way around. If you think that would make more sense for you, get Smart Auto-Rotate for 99 cents.

Nonetheless, Smart Rotator serves its purpose and works as advertised. We only wish the user experience was improved and the setup process was streamlined, since it’s incredibly time-consuming as it is. You can download it for free from the Android Market.

This application was developed by John Huang, who has previously authored Remote Web Desktop, an app that lets users control the phone from their computers from a web interface; and App Locker, which allows users to block private Apps by simulating a crash when unauthorized access is attempted.