If you’re a fan of cheap notebooks running Google’s bare-bones ChromeOS and enveloped in Samsung’s famed faux-leather, then you might be in luck, for a duo of Twitter photos via Evleaks suggests that a new Samsung Chromebook is on the way, sporting that polarizing finish. The teaser photos, which doesn’t show anything more than the rear of the device, and a Chrome logo atop that Galaxy Note 3-like material, doesn’t take Inspector Clouseau to piece the clues together, and with the Korean company having delivered some moderately attractive Chromebooks already, the Galaxy maker looks to be stepping things up a gear.

With Acer and Samsung both battling it out as the two major vendors of ChromeOS-running laptops, it’s Samsung that has been turning on the style as far as the form factor is concerned, and although this market is by no means a money-spinner compared to other, post-PC mobile devices, the company has still maintained more than a fleeting interest in updating and improving its Chromebook range.

Aside from the fact that this forthcoming model will likely go for that stylish-looking, cheap-feeling, hate-it-or-love-it ‘leather,’ the leak tells us little else about the specs or possible new features. But since ChromeOS is designed primarily to run on very low-end specs, don’t expect anything to grandiose here. 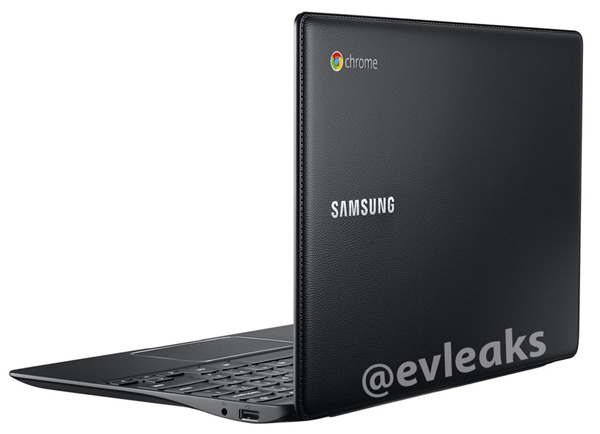 Of course, with the faux-leather finish having only been a tablet and smartphone feature hitherto, the leak could also suggest that a tablet running ChromeOS may also be on the way.  This is a bit of a long-shot, considering that such a device would perhaps have spawned more leaks than the now-customary pre-release Evleaks snap, but considering how the Chromebook Pixel showed us how smooth and slick ChromeOS can function when operated via touch, it’s certainly not beyond the realm of possibility. 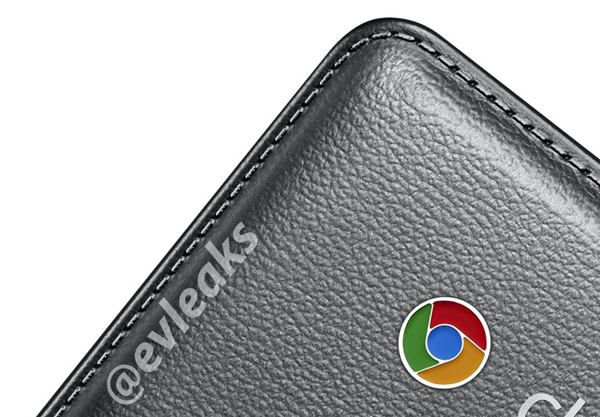 Whatever the case, with Evleaks dropping this rather blatant hint, the product is likely to be on its way, and with the Galaxy S5 announcement now done and dusted, we’d expect an imminent announcement of the new Chromebook. Its showcasing will probably pass with quite a bit less fanfare than the company’s latest humdinger, which comes in gold and boasts a fingerprint sensor, but nevertheless, we’ll still let you guys know of all the key details as and when, so stay tuned!