The Chromebook was initially touted as an affordable, efficient product catering to the very basic computing needs, but today, in announcing the Chromebook Pixel, a premium notebook offering a 12.85-inch, 2560 x 1700 touchscreen-equipped panel, it’s clear Google’s ideas evolved way beyond that original manifesto. The notebook is a direct competitor to Apple’s MacBook Pro with Retina display, and as well as the sharp display covered in solid Gorilla Glass, there is an LTE model (as well as Wi-Fi only), and it will begin shipping from next week.

We only first got an inkling last month that the Mountain View company may have decided to launch an assault on the high-end notebook market, today, that notion has become a reality, and if you’ve been in wait for a company other than Apple to bring that super-sharp panel to the notebook scene, Google has delivered the goods.

As well as boasting an incredibly high resolution, the 3:2 aspect ratio of the panel is designed to better fit Web content. Most notebooks offer wider screens, and while these are greatly suited to using traditional apps and watching video, they do tend to leave a lot of open space either side of the center when time is spent on the Web.

It has a super high resolution display, sitting at a mighty 2560×1700 screen resolution at 239PPI. The screen size is decent at 12.85-inches. And yes, it’s a touchscreen display. 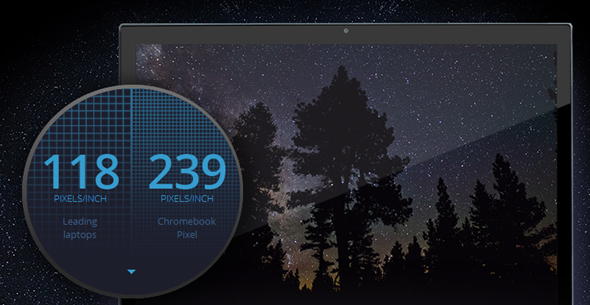 Opened up, it looks almost identical to the MBP, and seems to borrow many of those famed designed traits. Vents are covertly positioned at the hinge, the keyboard is backlit with those minuscule LED bulbs, and it’s a keyboard through which audio will sneak, with the speakers hidden underneath the keys. 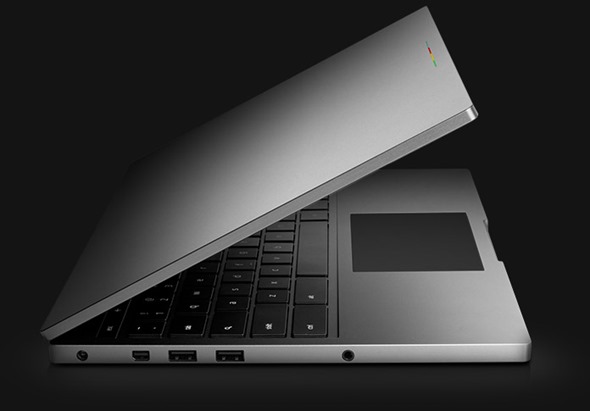 The edges within are rounder than on the Apple notebooks, thus not scratching your wrists when frantically typing, and there’s also that smooth, etched glass touchpad for supreme navigation and smooth gestures.

But while it will be debated ad nauseam whether Google’s notebook looks or functions better than Apple’s, one major trump card the Big G has in this field is the touchscreen. Apps developed specifically for smartphones and tablets will find a good second home on the Pixel. 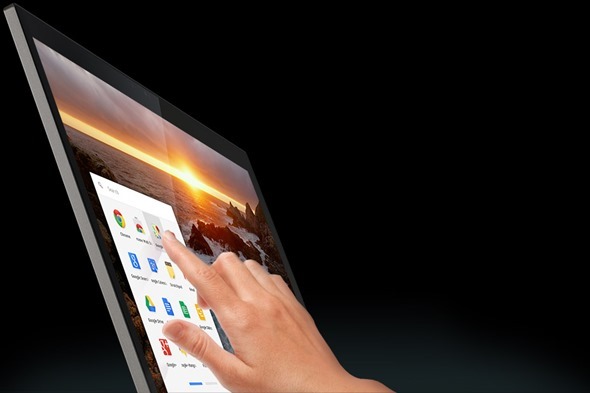 For the specs heads, there’s an dual-core Intel Core i5 processor clocked at 1.8GHz, Intel HD 4000 graphics, and 4GB of RAM. It can also play 1080p videos, and although battery life stands at only five hours, it’s certainly an impressive-looking bit of kit.

There will be two different versions of the Pixel. As with most tablets, there will be a Wi-Fi only model, and another packing a Verizon LTE modem. You can purchase unlimited day passes as required, or add your Pixel to a pre-existing Verizon shared data plan for just $10 a month.

The Wi-Fi model offers 32GB of on-board storage, and can be purchased right now from the Play Store for $1,299 in the US, or £1,049 in the UK. The LTE model will pack 64GB of storage, and cost $1,449. The Wi-Fi version will ship next week, while the cellular iteration will begin shipping in April. Both come with 1TB of Google Drive space for three years.