Apple has just seeded the second beta of iOS 6.1.3 (build 10B318) for iPhone, iPad and iPod touch, and is now available to download for those who are enrolled in Apple’s iOS dev program.

The installments of iOS 6.1.x are coming in thick and fast of late, and with iOS 6.1.2 having just been pushed out to the end-user by Apple, the next release – iOS 6.1.3 – has just reached its second beta. Downloadable only by those with paid-for access via the Apple Developer Program, it is available for all iPhone, iPad and iPod touch devices compatible with iOS 6, and although the first beta was known as iOS 6.1.1 beta 1, the Cupertino has deemed it necessary to rename this one to avoid confusion with those recent bug-fix updates.

As with iOS 6.1.1 beta 1, the major changes pertain to the Maps offering for iPhone users based in Japan. After the initial release of iOS 6, Tim cook was even forced to apologize for the state of Apple Maps, and although the United States, the United Kingdom, Australia and much of Europe have seen welcome improvements over the past couple of months, the fruit company has renewed emphasis on improving services to the Asian market.

Countries like Japan are to become a focal point of Apple’s business moving forward, and improvements such as turn-by-turn facility and directional optimization, it looks as though the Japanese version of Maps will finally get its improvements when iOS 6.1.3 finally hits the downloads page. This is, of course, providing no more glaring bugs arise between now and that point, and after the recent high-profile Exchange calendar issue aggravated further by the passcode flaw, Apple can ill-afford any more iOS-related oversights.

As well as turn-by-turn and optimization of directions (which, as with the previous beta, takes preference to highways over narrower roads), has also updated the freeway color to green, added several 3D landmarks, and updated icons of locations such as hospitals and fire stations.

Despite skipping the version straight to iOS 6.1.3 beta 2, this version also includes the passcode bug fix which allowed users to bypass the passcode protected lock screen easily, so it now looks as though the system of betas is back on track as it should be. 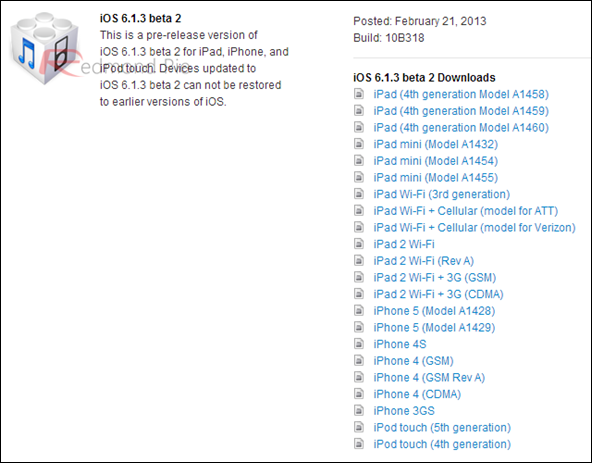 iOS 6.1.3 beta 2 for iPhone, iPad, and iPod touch is available to those on Apple’s Developer Program, and is available – as ever – over at the iOS Dev Center.