Regardless of whether your comic book allegiances lie with Marvel or DC, it seems that Samsung is ready to have your back with a customized hardware regardless of if you’re a hardcore Captain America fan, or prefer the mortal Batman, the Dark Knight. After working in partnership with the Marvel Universe to launch some limited edition Iron Man-themed devices, it’s now being suggested that the South Korean company is preparing for a partnership with the iconic DC Comics as part of a Batman-themed Galaxy S7 Edge handset launch.

Hardcore Superhero fans all over the world were literally rolling over with excitement when Samsung took the decision to launch the Galaxy S6 Edge Iron Man Limited Edition as part of the promotional push for the Avengers: Age of Ultron movie. In all honesty, there was probably some private discussion as to whether or not the Galaxy S6 Edge and the custom Gear VR experience should have been designed and built entirely around Iron Man rather than the likes of the Incredible Hulk or Black Widow, but that’s really something for the fans to debate. 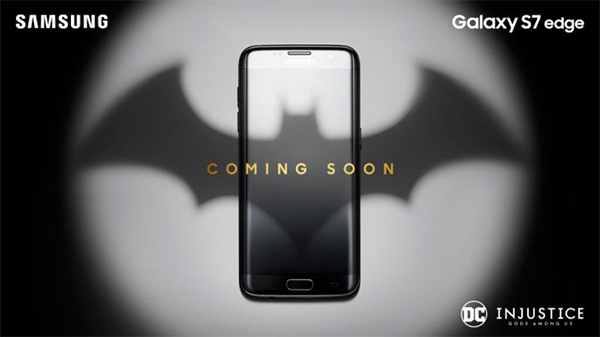 As Samsung prepares to move into partnership with DC Comics, we really can’t think of anything cooler than a dark, mysterious Batman-themed Galaxy S7 Edge.

The thing with this one is that the official @SamsungMobile Twitter account has tried to raise the excitement levels for the Batman device by tweeting an animated GIF showing the Batman symbol on a smartphone box, with the wording “Injustice is about to be served” as a reference to the Injustice: Gods Among Us game.

The very thought of a Dark Knight-themed Galaxy S7 Edge is definitely appealing, and will be so on a global scale given how popular the Batman franchise is, but very little else is known about the product other than the packaging which is stamped with the Batman insignia. Of course, we haven’t actually seen the device itself yet, so we can only hope that it has been engineered and engraved with Batman’s calling sign, as well as shipping with some customized wallpapers in tribute to the partnership.

We can only hope that Samsung goes into consumer sympathy mode and gives us a little additional information about the release, such as an availability date. The smartphone behemoth has now tweeted about it twice in the last three days, and has thus far only committed to a “coming soon” rather than a concrete release date. We will bring you more on this as soon as it becomes clear.