Apple Granted A Patent For MacBook With Cellular Capabilities

A recently granted patent by the United States Patent & Trademark Office (USPTO) has hinted that Cupertino-based Apple Inc. may be exploring bringing a cellular capable MacBook to the market in the future. Apple’s current range of MacBook machines ship with an excellent array of features and native apps by default, which in turn offer an excellent set of functionality to users. However, in order to extend that functionality, whether it be installing additional apps, accessing content on the Internet, or streaming audio or video media, there’s a requirement to be connected to the Internet either through a wireless or wired connection. This new patent introduces the idea of a new Apple MacBook which offers connectivity for a cellular network, similar to an iPhone or LTE-enabled iPad.

It’s probably fair to suggest that a fairly high percentage of notebook owners will choose to access the Internet via a wireless connection to their network. Some users, such as those who use a MacBook for work or via a home office for example, will prefer the stability and reliability of a wired connection, but on the whole, the majority will likely consume data wirelessly. In situations where a wired connection to the router isn’t available, or when traveling and there are no free or openly available Wi-Fi networks being transmitted, a MacBook which can stay connected via cellular data would really come into its own.

The recently discovered patent, which is part of a larger pot of fifty-five newly granted patents for Apple Inc., and is titled “Electronic device with dual clutch barrel cavity antennas”, floats the idea of a cellular MacBook by suggesting that an electronic device “may contain wireless communications circuitry that operates in long-range communications bands such as cellular telephone bands”.

The patent copy goes on to expand on the potentially available communications bands that a MacBook can connect to, but the real interesting aspect is the potential for a new MacBook to contain the ability to integrate a SIM card or similar for the consumption of a cellular network, similar to Apple’s cellular-enabled iPad models. 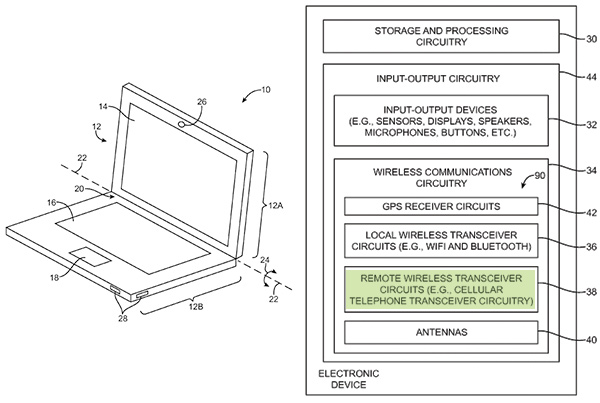 It’s been speculated over the last few days that Apple is looking to introduce a new MacBook Pro range in Q4 2016 containing an OLED touch panel in place of the current function keys above the keyboard. It’s currently unknown if a cellular capable MacBook is penned for release during the current calendar year, but it’s highly exciting to see that the MacBook could be about to go through some significant improvements.