The “stuck on a desert island” analogy is a thought-provoking hypothetical situation thrown up by many, in order to try and direct a subject into really mulling over an answer. When Samsung applied that theory to its Facebook followers – asking which electronic device they’d want if caught in the above situation – it seems the overwhelming majority opted for the iPhone, which is certainly a nice premise for the recently-announced iPhone 5.

The South Korean company has, it would seem, inadvertently wound up offering the upcoming Cupertino smartphone some additional coverage – as if it wasn’t already the hottest topic on the Web right now – and it’s coverage which Apple will gratefully receive.

Following the well-documented court battle between both Apple and Samsung, the answers to the social network poll will only further enrage a company which has launched a not-too-covert campaign of defamation against its bitter rival. Samsung has been ordered by Judge Lucy Koh to pay Tim Cook’s company over a billion dollars for, in short: copying iPhone and iPad designs, and although an appeal hearing is upcoming, it’s unlikely the decision will be overturned.

It’s also worth noting that when asking the question to its own Facebook followers, a big image of the Samsung Galaxy S III was also on display, so had consumers been sitting on the fence between the two biggest smartphones in recent history, surely the visual representation would have swung it in Samsung’s favor. 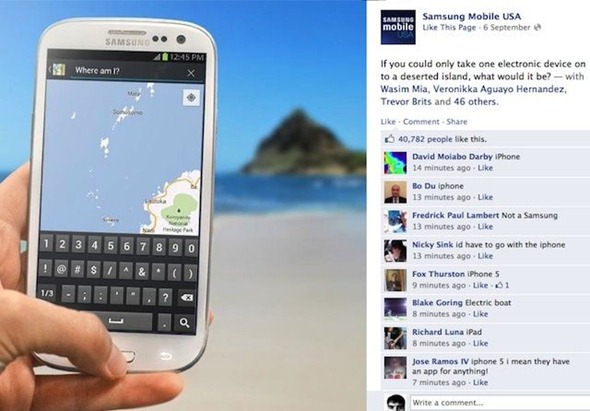 Whilst the question regarding whether the Samsung Galaxy S III is better than the iPhone 5 or vice versa is, of course, subjective (and perhaps unanswerable until the latter goes on general sale), there’s no denying that the tide is most certainly in Apple’s favor. Buoyed by the court decision and with analysts predicting another record Fall on all fronts, Samsung’s recent surge as the number one smartphone manufacturer looks increasingly under threat, and it will be interesting to compare the early iPhone 5 sales with those of the S III.

To round things up, let’s play our own little version of the desert island game. Which would you pick? The S III? iPhone 5? Or perhaps another smartphone outside of the two high-end titans?