A touch-screen phone is cool, but you know what’s really cool? Controlling it with your mind! Yup, you heard that right. More details right after the jump.

Samsung’s Galaxy S4 may allow users to control their smartphone by hovering their fingers just above the screen’s surface, but that’s apparently not quite hands-off enough for them (Samsung, in case you’re wondering), so they’ve joined forces with the University of Texas with the aim of taking things one step further.

In what some may think of as a strange development, Samsung is apparently working on taking the power of our brains and using it to control its tablets rather than having people stab at them with their greasy fingers. 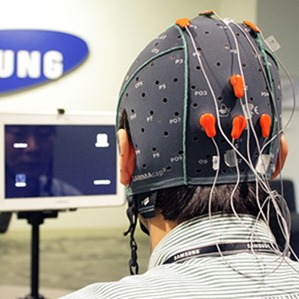 Whilst Samsung may eventually want to bring its fancy looking technology to the market at some point, it’s currently aimed squarely at disabled users who would normally be unable to interact with tablet computers. In order to make the magic happen, the user wears an EEG cap which takes electrical activity from the brain and translates that into on-screen interactions, with a success rate of between 80 and 95%. It’s a long way from being something that will be part of the user experience for everyone, but it could be a real boon for those unfortunate enough to not have the use of their hands.

Researchers at the University of Texas are apparently working on trying to make the required cap less intrusive, meaning that it can be worn all the time rather than simply worn as and when it is to be used. Such a development would be more important than it may at first seem, and one that we’re sure everyone hopes happens sooner rather than later. 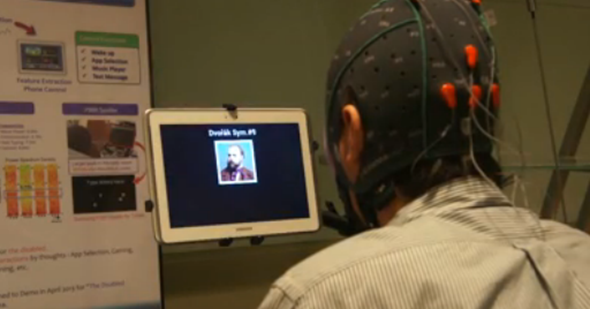 Technology that allows the control of devices using the power of the brain have been in development by various companies and learning institutes for a good while, but with a company as strong as Samsung working with the University of Texas, there’s a real possibility of something eminently usable being created at the end of it all. Fingers crossed that happens, and as soon as possible.

Just don’t expect it to be part of the Galaxy S5 announcement next year! Just don’t, and we mean it!