Samsung Is Bringing Motion-Based Angry Birds To Its Smart TVs

Angry Birds, a title which started out on iOS, is one of the simplest physics-based puzzlers around, yet has transcended into a billion dollar franchise available on pretty much any platform. As well as selling the title to pretty much every consumer in some way, shape or form, makers Rovio have sold a plethora of Angry Birds branded merchandise, including plush toys, smartphone and tablet covers, and other such peripherals, and it’s by far the biggest success story to emerge from any mobile platform.

Samsung, a company at the forefront of HDTV technology from the get-go, recognizes consumer need to toss poultry towards the nest of the snorting, smug green pigs, and has promised what may just be the most exciting Angry Birds experience to date. 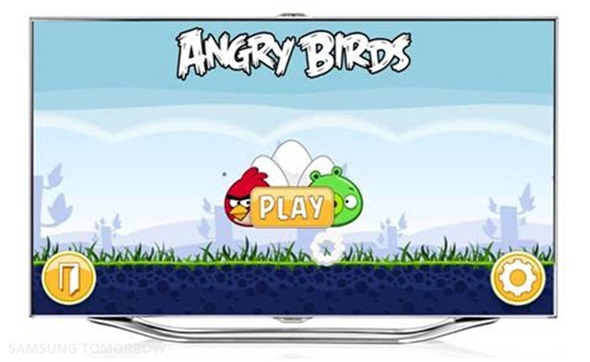 The Korean outfit is well known for delivering a decent television set, and today announced plans to bring an interactive edition of Angry Birds to its range of Smart TVs, featuring motion controls.

Given the success of Microsoft’s Kinect peripheral for the Xbox 360 (it was the fastest selling gadget of all time, after all), combined with the equally unprecedented way in which those Angry Birds have found a permanent nesting place in the consumer industry, this should be a sure-fire winner.

The concept will allow Angry Birds fans to fire off the yapping birds using hand motions, and although you’ll probably look a little foolish in playing it, I am struggling to see how this title won’t be a ridiculous amount of fun.

Samsung’s Smart Interaction sets will allow this travesty / awesomeness (delete as you feel appropriate) to commence, and as well as the initial motion letting you gauge the trajectory of your flying avian, additional movements will allow you to use the birds’ unique powers.

Samsung has been working with Rovio Entertainment for a year to get everything running smooth, and the title will release for free on select new television models, including the LED 7500 TV and above, along with the Plasma 8000.

There will also be an Angry Birds animation channel, which will sure look swell on the 75-inch TV the company also announced. At a cool $9,999, the mammoth ES9000 3D LED set, which will begin retailing next month, treads on grounds rarely visited in the consumer market, so if you’re a fan of cutting edge TV sets and Angry Birds, you’ve much to look forward to!