While the main source of Microsoft’s business stems from its famed software ventures, the company has certainly improved in the hardware stakes. Today, images have leaked onto the web depicting both the Wedge Mobile keyboard and purported Microsoft Wedge Touch mouse, the latter of which is said to accompany the keyboard.

A report over at WinFuture appears to confirm the Wedge Mouse is as gimmicky (yet remarkably cool) as it looks, its trump card being what’s described as a "360 degree scrolling function." Since it’s a leak, nothing can be confirmed specifically with regards to what it does, although its flat surface does indicate it could support some kind of gesture-based feature. 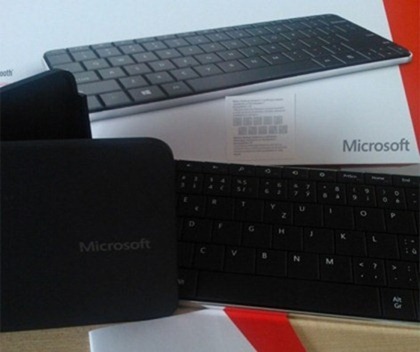 Microsoft has consistently delivered PC peripherals to the retail market over the years, and I would suspect most of you, like myself, have an old wired MS-branded mouse or grime-laden keyboard lying around in a drawer full of wires and cables. With the release of Windows 8 now confirmed for 26th October, the Redmond outfit will likely ship quite a few new keyboards and mice adapted to Windows 8’s unique interface.

The slick new keyboards demonstrated along with the Microsoft Surface outlined the company’s intent on delivering innovative products to supplement the Windows 8 experience. The Wedge Mouse and Wedge Mobile keyboard have already found their way onto Best Buy for pre-order, and both are reasonably priced at $60.99 and $68.99 respectively.

Microsoft has refused to comment on the Wedge devices, re-hashing its usual policy of not commenting on rumors or speculation, but with the more pressing issues of preparing both Windows 8 and the Microsoft Surface, it was always unlikely the company would break from usual habits to talk about a couple of comparatively meaningless devices.

Moreover, there are only a couple of questions Windows enthusiasts really want an answer to right now, and both of those are with regards to the aforementioned Surface. Strange it most certainly was that Steve Ballmer and friends decided to miss the minor details of price and availability when showcasing the interesting new gizmo unto the world, but we’ll have those details as soon as Microsoft feels at liberty to reveal them.

In the meantime, feast your eyes on the Wedge collection.