When it comes to advertising a new product, Korean outfit Samsung is famed for pushing the boat out, spending extravagant amounts to ensure that consumers are fully aware of its latest releases. Given that the flagship Galaxy S5 smartphone is now a fortnight old, it’s not surprising that we’ve already seen a swathe of new ads, and in the latest, Samsung makes sure to point out that the device’s new camera is superior to that of the iPhone 5s.

The rivalry between Samsung and Apple requires no introduction, but while most big tech companies will happily take a pop at one another here and there, scarcely a week goes by without some kind of back-and-forth between these modern-day adversaries. To mark Earth Day a couple of days back, Apple posted an advert taking an indirect (but not very subtle) jab at Samsung’s copying of its ideas – an allegation for which the Galaxy maker currently finds itself in court – and so this latest ad is, in a roundabout way, a little act of revenge. 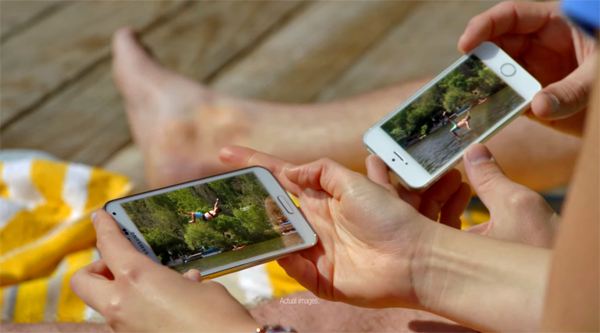 The Galaxy S5 has generally been well-received by both consumers and commentators alike, and while the 5.1-inch Super HD AMOLED display has been lauded as one of the best ever seen on a smartphone, the camera has also been the subject of reverence. The 16-megapixel offering includes 4K video shooting, and having tried it out for ourselves, we can vouch that it is indeed very impressive.

Rather than just reminding us of the rear-facing snapper’s credentials, though, Sammy couldn’t resist a little jibe at Apple, and even though comparing devices released seven months apart isn’t strictly fair, the foremost supplier of high-end Android devices couldn’t care one bit.

The ad is entitled “The Next Big Thing is Already Here” – a clear pop at the famous Cupertino catchphrase, and while these ads are usually subliminal, this particular short even calls out the iPhone by name. Noting that the Galaxy S5 “snaps photos with twice the resolution of the iPhone” may not be the most callous comment that Samsung has ever made about its arch nemesis, but the direct manner of the statement is certainly interesting, and we’re certain that when the next iPhone arrives, Apple may have one or two Galaxy-related sound bites of its own to share.

Anyway, check out the embedded 60 second clip, and be sure to leave your comments below.