Android fans might want to get a little excited from this announcement coming straight from Samsung: the Galaxy S II has sold 3 million units in just 55 days, becoming the company’s fastest-selling phone ever: that’s 1 phone sold every 1.5 seconds! 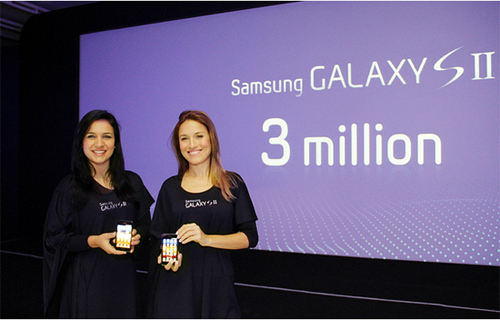 This announcement comes from a presentation held by Samsung itself, where the company revealed the big news. The Galaxy S II is the third phone in Samsung’s Galaxy product line, after the Galaxy and the Galaxy S. The new phone, which was first announced in February this year and launched in several countries a few months later. The S II is a killer phone, in regards to hardware, with a dual-core 1.2 GHz dual core ARM Cortex-A9, 1GB of dedicated RAM, an 8-megapixel camera, a microSD card slot and, of course, a larger-than-average 4.27-inch 800×480 screen. JK Shin, Head of Samsung’s Mobile Communications Business, pointed out that it is Samsung’s goal to create premium-grade devices:

the GALAXY S II represents our most advanced smartphone to date and demonstrates Samsung’s commitment to deliver premium, market-defining devices,

In addition to this important record for the company, Samsung has also sharply increased its market share in Europe. In the UK, the phone was picked by Uswitch.com, a local gadget-related publication, as the Best Mobile Phone for May and June. Meanwhile, Samsung Electronics became the most-selling brand in the country for 72 straight weeks, a boost clearly caused by the excitement around the Galaxy S II. In Austria and Switzerland, the phone has reached market shares of 30% and 36% respectively.

Samsung remains committed to pushing the phone out to the growing market that is Latin America, starting with Mexico and Brazil, where the Galaxy S II arrived in shelves on June 30th, just a few days ago.

Samsung Electronics held the launching events of Galaxy S 2 in Mexico and Brazil on June 30 to spread its ‘smart’ frenzies to Latin America.

Samsung seems to be missing the opportunity to launch the phone in the US, where it’s currently only available unlocked for nearly $700, on websites like Amazon. According to rumors, the Galaxy S II will be available on AT&T really soon, attached to a contract in order to lower the price, but until then, American customers will be stuck with paying full price.