Apple and Qualcomm are currently locked in a legal dispute that will see the pair go to court next week. However, in a new report by The Wall Street Journal, we’re beginning to learn more about how the problems began and it stretches all the way back to 2017. In fact, the relationship between Apple CEO Tim Cook and Qualcomm CEO Steve Mollenkopf appears to be a large driving force in the dispute.

The key issue revolves around the fact that Apple has to give Qualcomm $7.50 from each iPhone sold, something that Tim Cook is keen to change. However, Qualcomm is understandably less keen on the idea, with his relationship with Mollenkopf non-existent.

Cook is said to find it “egregious” that the payments are made, despite it being something that was originally signed off by former Apple CEO Steve Jobs. However, it’s Cook’s belief that by being paid $7.50 from each iPhone sale, more than all other licensees combined, Qualcomm is profiting from Apple’s advances in technology that have nothing to do with the chip maker. Cook started to push back on the idea when he took over from Jobs in 2011.

Both companies raked in sales. By the end of 2012—five years after its launch—Apple had sold more than 250 million iPhones and generated more than $150 billion in sales. Qualcomm had collected more than $23 billion in royalties from all its partners and almost $42 billion in chip and other product sales over the same period.

Mr. Cook, who succeeded Mr. Jobs as CEO in 2011, found it egregious that Apple paid Qualcomm more than every other iPhone licensee combined, people familiar with the negotiations said. 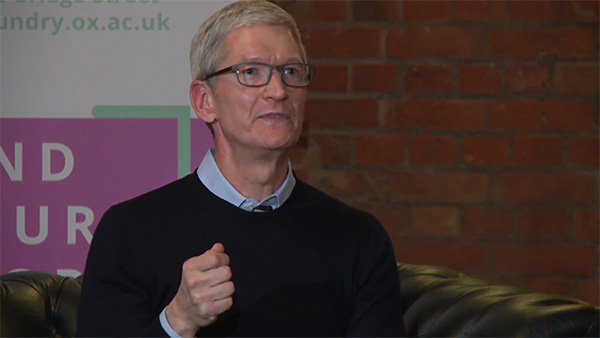 It’s hard not to think that Cook has a point, but the relationship between the two CEOs is apparently so far gone, there’s little chance of an agreement being reached. Instead, Mollenkopf left the talking to his company’s General Counsel when a meeting with Cook was arranged last year.

Mr. Mollenkopf, who suspected Apple of supporting a hostile takeover of his company, initially didn’t speak, leaving his general counsel to start talking, according to people familiar with the meeting.

The awkwardness punctuated a distant relationship between the chief executives that has turned their companies’ conflict into one of the ugliest corporate battles in history.

Beyond court, it’s difficult to see where any of this is going. Cook doesn’t strike us as someone willing to back down when he believes his company is being wronged, and we don’t imagine Qualcomm will be too happy at the prospect of losing its cash cow, either.

For the full ins and outs of the relationship between Apple and Qualcomm over the last few years, check the full report out. It’s well worth a read.