Reeder 3.2 For iPhone Released With Feedly Support As Google Reader Shuts Down

We’ve known for over three months that the once-loved Google Reader was about to meet its maker. Google announced back in March of this year that they would be retiring their extremely popular RSS subscription portal, a decision that resulted in hoards of users looking for alternative tools and services to handle their RSS based needs. The countdown has been on since March, and now that Google Reader’s date of destiny has finally been and gone, we are now seeing the highly recommended Reeder iPhone app gain a significant update to improve its chances of being the adopted tool of choice for those on the lookout.

The shutting down of Google’s RSS synchronization service caused a fair bit of controversy when it was initially announced. As of yesterday, the Google Reader service no longer exists, but it still lives on as a bitter pill to swallow for some who regularly embedded their favorite RSS streams into the service for use at a later date. Our Top 5 Google Reader Alternatives post introduced a number of web-based services that could take over the mantle from Google Reader. One of our highly recommended services was Feedly, which has now gained support directly from within the Reeder app. 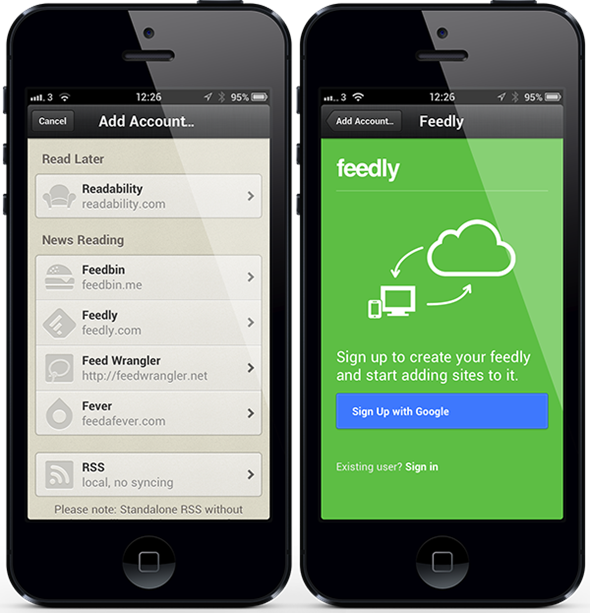 Version 3.2 of Silvio Rizzi’s Reeder is now available to download from the iOS App Store. This latest version not only natively adds support for the free-of-charge Feedly service, but also introduces partial support for the commercial Feed Wrangler option. Although it’s great to see this level of support being added into a native iOS app such as Reeder, the currently available version doesn’t offer compatibility with Feed Wrangler’s Smart Streams, one of the service’s biggest pulling points.

Feedly has managed to attract a plethora of new fans due to the demise of Google Reader. The simplistic and elegant interface makes adding and organizing content extremely easy while possibly bringing the most familiar setup of all of the alternatives for those who have regularly used Google’s option over the years. The latest 3.2 update to Reeder for iPhone will see Feedly items being brought directly into the app. Support for Google Reader has also been removed as part of the update but any added streams will remain.

If you’ve been following Redmond Pie on Google Reader for a long time, we recommend adding the Redmond Pie RSS feed to your favorite RSS reader of choice to get the latest updates from us.

(Source: Reeder for iPhone on the App Store)