It is with great pleasure to announce that Redmond Pie will be sponsoring MyGreatFest – The world’s first iDevice jailbreak convention, which is scheduled to be held in London, England on September 17th 2011.

Pioneered and organized by Craig Fox, the convention will play host to some of the biggest names in the iOS jailbreaking community, with jailbreak star and Cydia founder Jay (Saurik) Freeman already confirmed to be attending as keynote speaker. Fox also plans to run similar events in the US next year, with global domination on the agenda after that.

The MyGreatFest event is set to be the worlds first iCommunity and Jailbreak convention ever held and is the brought to you by the founder, Craig Fox, aka @flawlessfox.  Craig has assembled a dedicated, knowledgeable team from all walks of life who all share the same passion and love of their iDevice(s).

The cynic in you might be thinking, “So this is just a bunch of tech geeks getting together to look at their beloved iPhones”.  Well rest assured, it’s not.  MyGreatFest will teach you how to use your devices and how to get the best out of your iPhone, iPad and iPod touches.  The MyGreatFest experience is proudly associated with the thriving iCommunity and will educate users on how to most efficiently use your device whether it be through Jailbreaking or App Usage.

Tickets for the event are available via the convention’s eStore and are priced at £27 for adults and £17 for children. Group discounts are also available.

To promote the event, MyGreatFest is also running an “iPad 2 Bonanza Giveaway”. If you purchase one of the official silicon wristband from eStore here, you are automatically enrolled for the iPad 2 giveaway. Also, every ticket bought till all the official wristbands are sold-out also marks as an entry. More info on the giveaway can be found here. 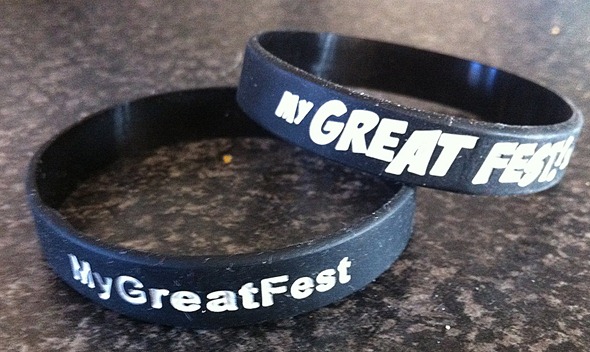 I, on behalf of Redmond Pie’s team will be attending the event this year in UK. It will be a great opportunity to engage with the community that makes it all happen in iOS jailbreak world. If you plan to attend the event, don’t forget to say hello if you spot me.

UPDATE: Make sure you follow @MyGreatFest and @FlawlessFox on Twitter for all the official updates on the event.