Real-World Test Reveals The iPad Has The Best Battery Performance

Whenever consumers are considering to purchase a new piece of kit like a smartphone or a tablet, there are always important questions to be asked about whether or not that device meets their specific requirements and whether or not it is fit for their overall intended purchase. One of the most important aspects of any mobile device is the battery life, and although each manufacturer gives an indicator on how long it should last for before requiring a charge, we should know by now that this information is based on perfect factory conditions without any load being applied to the device. An independent consumer group has taken the chance to look at the main players in the tablet game and pit their batteries against one another with some rather expected results.

The United Kingdom based Which? magazine has taken the eight most popular 10-inch tablets, as well as the six highest ranking 7-inch tablets and subjected them to some real world web browsing testing in order to get a fairly comprehensive result of battery performance levels. To make sure that the test was as fair as possible, each tablet device had the screen set to a brightness level of 200 nits. with all tested web browsing taking place over the same wireless connection rather than using a cellular data connection that puts additional strain on battery performance. 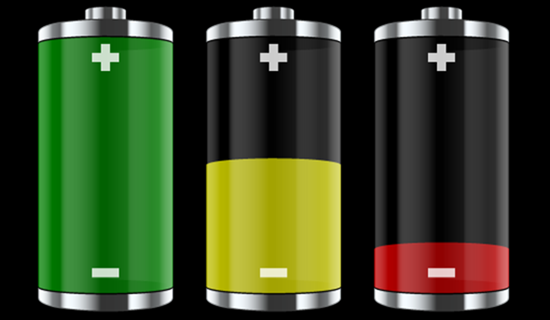 The magazine also took the opportunity to test additional aspects of the tablets, including how they actually perform over cellular data connections, but for the benefit of keeping things simple and comparing the most common method of web browsing on this kind of device. we are only really concerned with how they perform over Wi-Fi. In the 10-inch class the iPad 2, iPad with Retina display, the Sony Xperia Tablet S, Samsung Galaxy Tab 2 10.1, Microsoft Surface RT, Google Nexus 10 and the ASUS Eee Pad Transformer Prime were all tested with the Retina display iPad coming out on top with 811 minutes of browsing time over Wi-Fi. 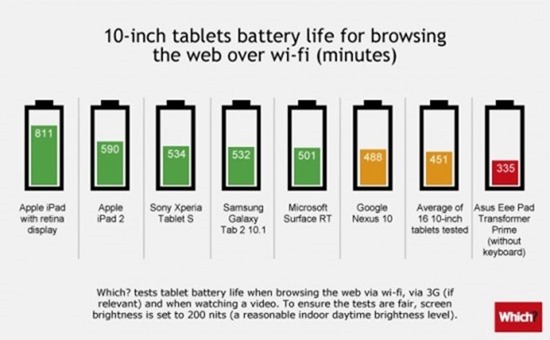 The worst performing tablet in the class turned out to be the Asus Eee Pad Transformer Prime with a relatively paltry 335 minutes of browsing. Apple once again led the way in the smaller tablet results, with the iPad mini notching up 783 browsing minutes under the same conditions. The Kindle Fire HD and Nexus 7 both produced similar performances to each other with the Samsung Galaxy Tab 2 7.0 holding up the results table with 425 minutes of browsing. 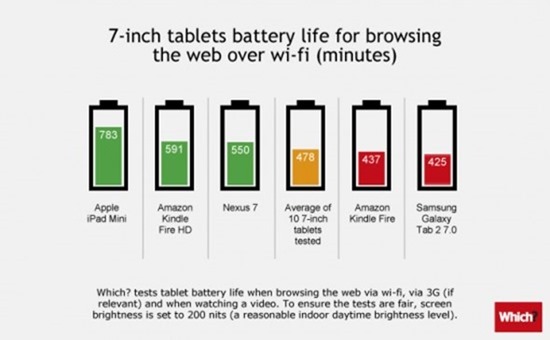