President Donald Trump was in the news yesterday after it was claimed that the serial tweeter was using insecure iPhones to make calls to old friends rather than secure government lines.

This, the story claimed, meant that both Russian and Chinese intelligence agencies were routinely listening in to what was being discussed, with US officials simply hoping that Trump didn’t say anything he shouldn’t during the calls. Predictably, that drew scorn from the President.

According to Trump, “I only use Government Phones, and have only one seldom used government cell phone,” with the tweet also pointing out that the “Story is soooo wrong!”

However, as can often the be case with these things, Trump may actually have fallen foul of his own need to weigh in after it was noted that the tweet was sent from an iPhone.

Of course, none of this really proves anything. Trump may have had someone else sent the tweet as we know that his aides have access to the account. For all we know, there’s a secure iPhone that he can use. If not though, this may be another case of someone tweeting from an iPhone while forgetting that the source of the tweet is visible in some third-party Twitter apps. 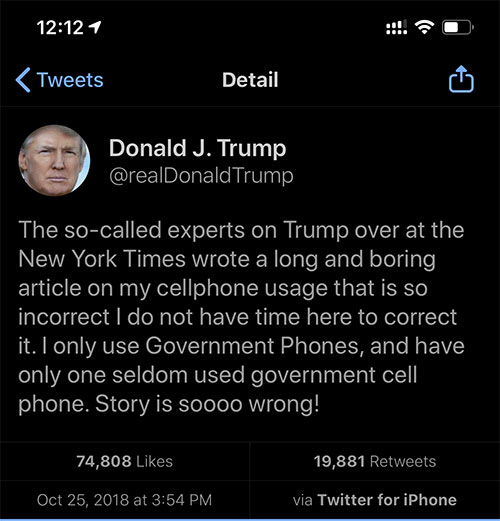 This is usually something that crops up when a hapless celebrity endorses an Android flagship phone only to sent the tweet from their personal iPhone, looking somewhat foolish in the process. We don’t know where on the scale of damming-to-inconsequential this latest Trump faux pas may be, but it made us chuckle nonetheless.