Niantic Labs is gearing up the world of Pokemon Go for Valentine’s Day event update by offering a number of incentives to ensure that Trainers keep chasing those adorable critters during the romantic season.

The company behind the worldwide smash-hit augmented reality game is making some time limited server side changes to ensure that Trainers gain double Candy when interacting with the game over Valentine’s Day. The changes don’t affect how the game is played. Nor do they introduce any additional features or functionality, but rather focus on introducing some incentives for gamers to keep coming back even when in the middle of romance. 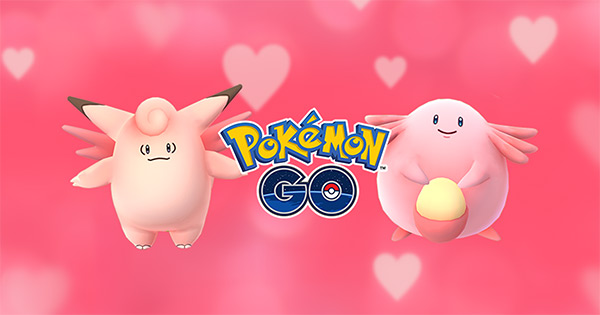 Given that candy and flowers are typically given to loved ones on Valentine’s Day, Niantic is making it so Trainers are rewarded with double the Candy amount when catching, hatching, or transferring a Pokemon to Professor Willow. If you have to spend Valentine’s Day alone, then you may as well comfort yourself with twice as many candies courtesy of the Pokemon world.

And it doesn’t end there. During the Valentine’s Day celebrations, Niantic will also be making sure that Chansey, Clefable, and many other “adorable, pink Pokemon” will be available to be caught on a more frequent basis when Trainers are out and about in the wild. Cleffa, Igglybuff, and the adorably named Smoochum, will also hatch out of Eggs more frequently so it would be beneficial to hit the pavement and cover the necessary ground to get those Eggs hatched.

Finally, those lovely romantic Lure modules will also last for a whopping six hours for the entire duration of the Pokemon Go Valentine’s Day event. That’s six whole hours of wonderful critters being attracted to your location.

If there’s one thing you can rely on from the world of Pokemon Go, it’s the continuous updates and improvements, both from a feature and offer perspective. With the incentives and promotions offered during Christmas, and now this Valentine’s Day special, it’s becoming increasingly obvious that Niantic will continue to give us something to look forward to during times of celebration. We’re looking forward to Easter now.