We’re still continuing to learn new bits of information all the time with regards to iOS 8 and OS X 10.10 Yosemite, and with communication being an integral part of both of Apple’s main operating systems, it should come as little surprise that both iMessage and FaceTime look set for some healthy improvements.

As per a report from 9to5Mac, OS X Yosemite 10.10 may bring screen sharing to the repertoire of the desktop software’s iMessage app, in a similar manner to which other IM services currently offer. At present, the feature is apparently not functional in the Developer Preview, but with a good few months till projected release, Apple’s engineers should have everything primed and ready to go for the retail date.

As well as screen sharing on Yosemite, the report also mentions FaceTime Audio conferencing on iOS 8, which some users of the very first beta have picked up on. Hitherto, FaceTime Audio has been a pastime shared by two iDevices, but with iOS 8, users will be able to conference call for free using Apple’s continually improving FaceTime infrastructure.

At the time of writing, there’s still plenty of work to be done on both OS X Yosemite and iOS 8 from Apple’s end, and as the improvements continue to be made in either department, we’ll surely stumble across a multitude of exciting new features and quirks along the way.

This whole week has been a drawn-out dissection session, with users eager to see what has been packed into these major releases, and while we were taken aback by the revelations of third-party keyboards and widgets with iOS 8, the various smaller alterations must render iOS 8 among the most significant updates that Apple has rolled out to date. 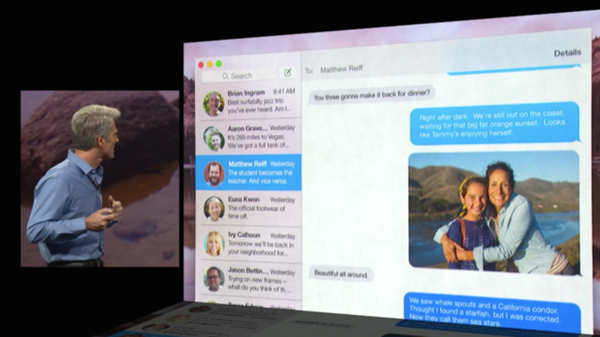 OS X Yosemite 10.10 is expected to appear at the Mac App Store later this year as a free update for compatible Macs. Those who are running Mavericks or Mountain Lion will have no problem grabbing and installing Yosemite on their machines, but for the sake of clarification, please go ahead and check out our Mac compatibility post to see if your Mac meets the minimum requirements.

iOS 8, meanwhile, will likely manifest in September, alongside two new iPhones and in advance of the elusive iWatch, which is said to be launching later on in the year.