Apple has finally flipped the switch and made the OS X 10.9.2 Mavericks download available to the end users today. Details on what the update brings and how to download or update can be found below.

According to the official changelog that comes with the update, users will see a handful of major updates and fixes. Some of the new additions that come as part of this update are: inclusion of FaceTime Audio to the native FaceTime and Messages app, the ability to block contacts, fixes to the native Mail app, VPN fixes and more.

But this is not what this update is really about. It was discovered last week, with the release of iOS 7.0.6 and 6.1.6, that iOS and OS X both are plagued with a very critical SSL flaw that allows sniffers to intercept incoming and outgoing connections from an iOS or OS X device, provided that they’re on the same network. Thankfully, Apple has finally patched the flaw with the release of OS X 10.9.2, and we can’t emphasize enough how important this update is. Therefore, it is highly recommended that you go ahead and update your Mac right away to patch your computer from this major vulnerability.

The complete changelog for the OS X 10.9.1 Mavericks update is as follows: 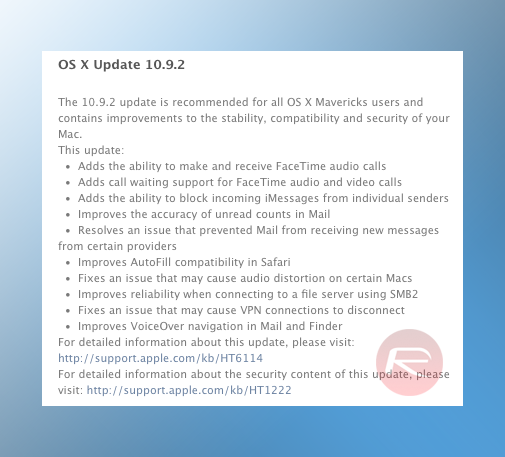 The update is available from the Mac App Store immediately, and like we said before, there’s no point in holding yourself back from it. Simply launch the Mac App Store app on your OS X toting Mac, click on the Updates tab on the top right hand corner of the main window, and then hit that glorious Update button.

It’s a shame that Apple took a while to address such a major issue that has existed for a long time. But still, Apple has finally come through with a  fix and is available for every Mac and iOS user.

If you’re in the ownership of an iOS device, which includes the iPhone, iPad and iPod touch, then it’s highly recommended that you update to iOS 7.0.6 right away. We’ve linked to the iOS 7.0.6 download post at the foot of this article.