The wait is coming to a close, as the teaser tweet from Nokia USA aims to tout. The US division of the Finnish company tweeted a teaser image showing off two Lumia 1020 devices; one from the back with the impressive 41-megapixel PureView camera in all its glory, while the other showing the same device running – you guessed it – Instagram for Windows Phone!

The highly coveted social photo sharing app is still missing from the Windows Phone platform, and while users of the growing platform had been craving for Instagram for quite a while now, it’s just recently after Nokia’s Abu Dhabi event that teasers and images around Instagram for Windows Phone have picked up pace, indicating that the arrival of the actual app might be close. Frustratingly still, even the tweet from Nokia USA doesn’t give any ETA, either, continuing with the “in coming weeks” mantra that we’ve been hearing for a while now.

The tweet gives credit for making this happen to the Lumia user community, claiming:

“You did it! Thanks to you, Instagram is arriving on Nokia Lumia in the coming weeks. RT if you’re excited!”

Another interesting thing to note in the message is the usage of the term Nokia Lumia and not Windows Phone. This, when viewed in the light of the recent happenings at the Nokia event in Abu Dhabi last week, where Instagram CEO and co-founder Kevin Systrom made an appearance, hints towards a stronger-than-usual partnership between the Facebook-owned social sharing platform and the Finnish Windows Phone maker. Microsoft’s Joe Belfiore has confirmed though that all the recently announced apps like Instagram, Vine and Xbox Video at the Abu Dhabi event are coming to all Windows Phone devices. 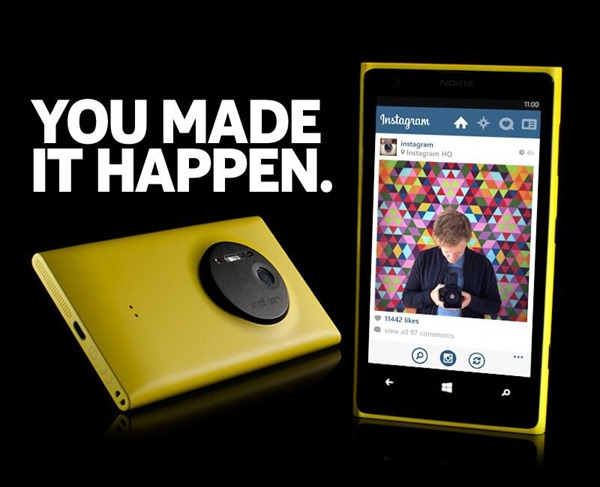 Nokia’s Lumia lineup of devices boast some of the best cameras on any smartphone, with Lumia 1020 comfortably sitting on the throne with arguably the best of the best lens and software available as of today. With Instagram arriving on WP, we might expect the social network flooded with a completely new breed of high-quality, lossless zoom images that will not only outshine all others, but just might make #lumiagraphy the most popular hash tag on the social sharing platform.