NYC Loves iPhone 6: Lines Outside Apple Store Strong Even After A Month [Photos]

iPhone 6 and iPhone 6 Plus lines are still stretching down the entire street outside the flagship Apple Store in NYC. As always, eager consumers lined up in massive numbers outside the store on launch date – as expected. However a month later, people are still seen lining up in huge numbers to get their hands on iPhone 6/6 Plus.

Pictures coming in this morning from NYC, show a line of dedicated iPhone fans, stretching down an entire block. While we can still only speculate about the actual sales figure of the iPhone 6 / 6 Plus, if the still bigger than bigger lines are anything to go by, we can take Apple’s word for it, that this year’s iPhone sale was truly record breaking. That claim was made just into the first 72 hours of the phone’s launch, so you get the mind bamboozling idea right? 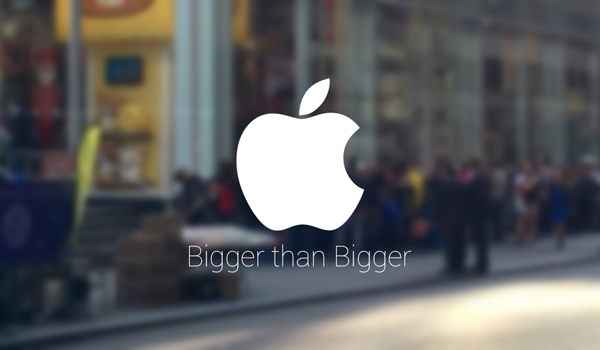 Meanwhile, Apple had a surprisingly calm Friday morning on the iPhone 6 / 6 Plus launch day in China, with no more than a 100 people lining up at the Sanlitun Apple Store in Beijing, when it opened up at 8am. Most of the customers lined up were those who had pre-ordered the iPhone from Apple’s online store, but the calmness and order was largely due to a revised pre-order system deployed by Apple, which prevents masses from lining up at a venue, within the same time-frame. Pre-orders in China for iPhone 6 / 6 Plus were huge though, with a combined total of 20 million units pre-ordered in first 24 hours alone.

The case of NYC however, is one rarely seen before, and as much as it screams the love the city has for iPhones, it also goes on to show how more and more people are hopping up on the iOS bandwagon. It’s a fact that every new iPhone boasts of sales that bests all that came before it, and the iPhone 6 / 6 Plus is doing just that – maybe doing it too well. 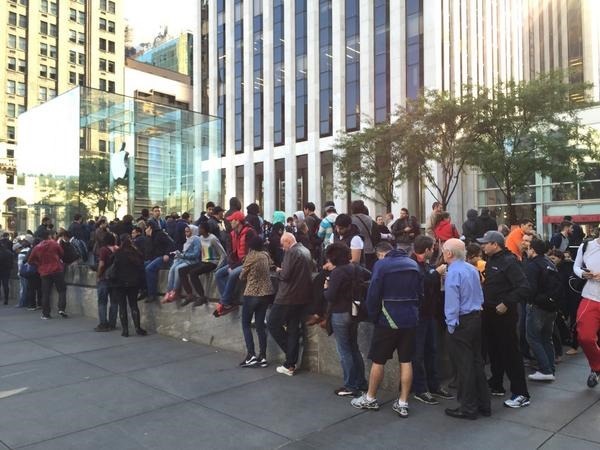 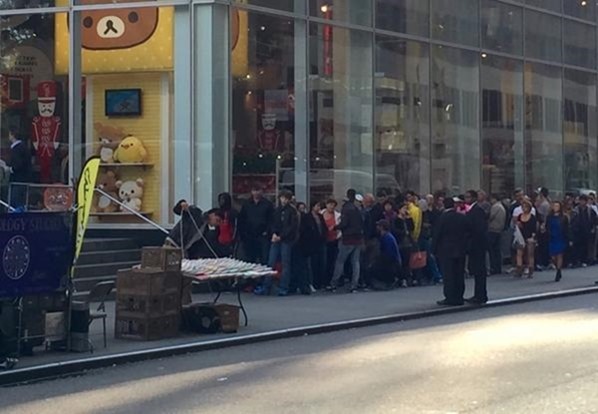 Be as the lines may be right now, the days up till here haven’t exactly been so calm, with the dark news of the Chinese mafia buying iPhones from consumers coming right out of the store, fans who slept in garbage bags, or those poor souls who wept after being removed from the line, etc.

Let us know what you think about this craze for Apple’s month-old smartphones. Would you want to get into a line this massive to get your iPhone, or would you want to wait it out? Sound off in the comments section below!