As promised, Google has released an updated Developer Preview of Android’s latest Android 5.0 Lollipop OS. The updated images come in for the Nexus 5 and Nexus 7 2013 (Wi-Fi only) devices, but leave out the slightly older Nexus 4. Android 5.0 Lollipop’s release was announced by Google this Wednesday, and the OS will be shipping out with its new line up of Nexus devices – Nexus 6, 9, and the Nexus Player.

Developer Preview of Lollipop – Android L – has been around since June of this year, but it is not clear what actual changes the search giant has actually made with these updated images. Android developers can now run the latest preview images on their Nexus 5 and Nexus 7, to work out any kinks their apps might have developed when running on Android 5.0 Lollipop. With the new Nexus devices shipping out in November, Google will be hoping for app developers to have worked out the bugs or incompatibility issues with their apps, when the devices hit the market. 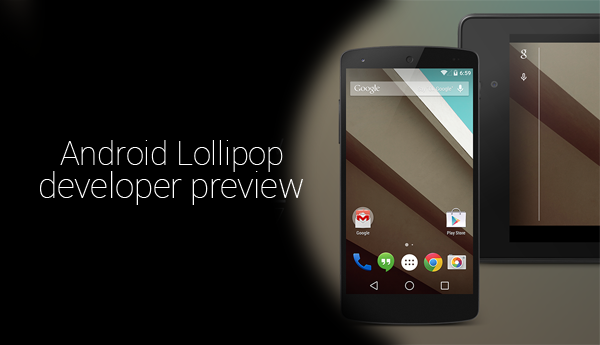 Android 5.0 Lollipop carries a massively overhauled UI from Google – Material Design. Focusing on flatter icons, fluid physics-based animations and a much bolder color palette; Lollipop is Google’s first major design overhaul since Android 4.0 Ice Cream Sandwich was introduced. It will be important for Lollipop to see a host of apps that carry forward with the same Material Design language as the rest of the OS and native apps. It is clear that Google is attempting to bring forth a unified experience across all its Android based devices, and the app experience will be pivotal to achieving that goal.

If you are not a developer, and wish to take the preview images for a test ride on your Nexus 5 or 7, I would suggest you wait for an official release. However, if the words Android SDK and ADB mean something to you, installing the preview images on your devices is a relatively stress-free task. However, chances are that you might loose all your data when done installing the image, so be sure to back up all important data from your device.