Earlier on today, Nokia announced three new Android-based devices in the form of the Nokia X, Nokia X+ and the Nokia XL. As you might imagine, getting any decent amount of time with these new devices is rather difficult, but here, we present an exclusive brief overview of the Nokia XL – the largest of these three new specimens.

Tomorrow, we’ve been promised some more quality time with the Nokia XL, at which point, we’ll be taking a closer look at its features, and dissecting that Android-based ecosystem. A short while ago, though, we got a little taster of the handset, and aside from boasting a substantial 5-inch display, it actually feels rather nice to hold. 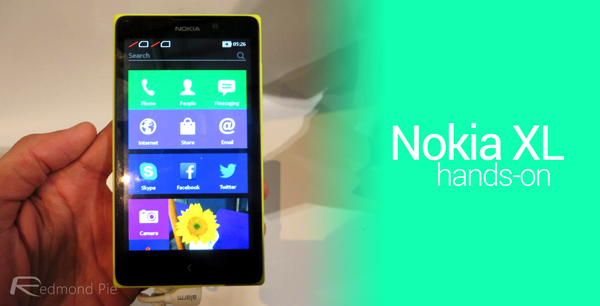 Its design, as you’ll have noticed, is very much influenced by the Lumia Windows Phone range, but while the Nokia XL lives up to its billing with that large panel, the main attraction is the operating system. Running, as we previously suspected, a ‘forked’ version of Android, Nokia CEO Stephen Elop has described the Nokia X range as a "gateway to Microsoft," and as you can see from the tile-heavy UI laden in the likes of Skype, Here Maps and other Redmond-based niceties, this platform is very much a Windows Phone-Asha concoction.

Having tried the Nokia XL a couple of times this morning, we’ve found it to be a slick, almost seamless experience, which is a trait that we’re grateful has carried over from Windows Phone. A simple swipe to the side reveals a useful ‘Recents’ menu, allowing you to catch back up with tasks you may have started but not completed, and overall, the interface feels simple, functional, and – most importantly – doesn’t feel bereft.

For such a price as €109, it provides both quality and value, and with the opportunity to use Android apps on a Windows Phone-centric platform, this could yet prove to be both Nokia and Microsoft’s "in" among the big players in the smartphone game.

Check out the brief hands-on video below, and be sure to check out our extended, sit-down coverage of the Nokia XL tomorrow.

We’re here at Mobile World Congress 2014 through the next couple of days, and will be keeping you guys updated on all the new products and announcements that you need to know about. We’ll be taking an in-depth look at Sony’s new Z10 smartphone next, and with Samsung’s Galaxy S5 set to be announced later on, there’s a great deal to be looking forward to, so stay tuned to our coverage here at Redmond Pie!