Windows Phone, whilst not having found a significant user-base just yet, is widely considered as the only threat to the dominance of Google’s Android and Apple’s iOS operating systems, and despite having only released a handful of devices with Windows Phone 7.x, the anticipation regarding Windows Phone 8 is almost as great as that of the desktop edition.

Although a host of manufacturers are currently working on Windows Phone 8 handsets, Nokia is the company with the most pressure on its shoulders. The Finnish company certainly delivered the goods with its first batch of Lumia smartphones for Windows Phone 7, so naturally, the tech world has a close eye on what Nokia has in store.

The first Windows Phone 8-compliant Lumias are expected to be shown off by both Nokia and Microsoft at a special event on September 5th, and thanks to a leak via the Twitter handle @evleaks, we can now get our first glimpse of what is purported as the Lumia 920. It includes a PureView camera, something Nokia has been plugging and hinting at over the past month or so, and is currently operating under the codename “the Phi”. The Lumia 920 packs in a very agreeable 4.5-inch display, and the image suggests there’ll be a variety of vibrant colors, akin to Apple’s iPod nano range over the years. 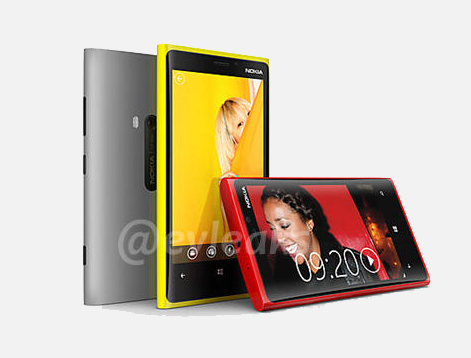 Unfortunately, other juicy details have yet to surface, but with the Lumia 820 also having surfaced today, we certainly cannot wait for the special, New York-based event to commence next week, where we’ll be given all the details of what’s in store. Of course, we’ll have the event – and all other Windows Phone 8 news – covered from head to toe, so stay tuned to our coverage here at Redmond Pie.

As a final thought, it will be interesting to see the Windows Phone market become a real competition between manufacturers sans Android, and although Nokia will be looking to run things much in the way Samsung does for Google’s ecosystem, it certainly won’t be easy, and the Korean company will be one of those vendors looking to make an impression on Windows Phone also.

Samsung revealed the ATIV S at IFA, and its brushed aluminum chassis alone will likely be enough to woo the majority of consumers, so Nokia won’t have it easy. It makes you wonder though, with the cheap, plasticky exterior of the Galaxy S III, why Samsung didn’t give its flagship Android the same slick, sturdy finish.