Video Demo Shows How Apps, Games And Videos On A 4-Inch iPhone Would Look Like

A new video has been put together with the aim of illustrating how apps may look on a new, taller iPhone display.

If you believe everything you read online, then it is almost a certainty that Apple is set to announce an all-new iPhone come September 12th, replacing the current iPhone 4S model with a new, redesigned model.

With the iPhone 4S featuring the same body as the iPhone 4, this time around Apple is expected to make wholesale changes to the device’s chassis, giving the company the perfect opportunity to make some changes in the screen department, too. 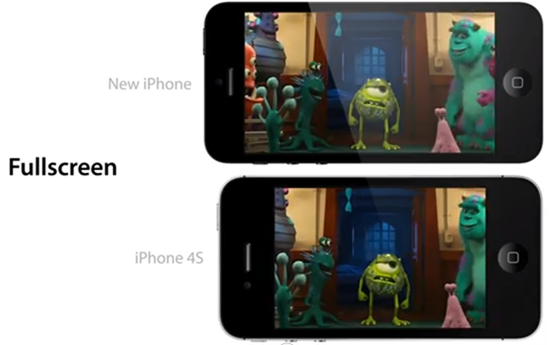 As has been the speculation for some time now, MacRumors believes that the new iPhone will feature a larger screen than the previous models, with 4-inches set to be size Apple plumps for. Oddly, though, that screen is believed to be taller than the existing iPhone’s screen whilst still being the same width. The result is a taller iPhone, with increased resolution vertically rather than horizontally. The almost 16×9 ratio will be perfect for movies, but what about apps?

In order to try and visualize where Apple is going with the iPhone, MacRumors has had a video put together in an attempt to illustrate how apps may appear on a new, taller iPhone. The question revolves around how apps coded for the current iPhone’s resolution will handle the new, more lengthy resolution.

According to MacRumors‘ speculation – and it is little more than that at this stage – existing apps would be letterboxed in a similar fashion to how iPhone apps are displayed on the iPad. Not ideal, but there you go. Obviously developers would be encouraged to release updated apps, complete with higher resolution artwork.

The only real outcome here is that we have yet more confirmation that nobody really knows what the state of play is with the upcoming iPhone’s screen. If a new, taller screen is indeed set to be part of the next handset then developers will once again need to retool their apps accordingly. Cue thousands of developers hitting Twitter to whine!

Bring on September 12th, when we’ll hopefully have some answers to all the questions that invariably crop up around iPhone announcement time!