Nexus One Blown Away by iPhone 3GS in Browser Speed Test

Engadget in its extensive review of Google Nexus One carried out a web browser speed comparison test between iPhone 3GS, Nexus One and Motorola Droid. The test involved opening of engadget.com homepage at the same time on all the three handsets, running on a local WiFi network. Mobile Safari on iPhone 3GS dwarfed both the Android based devices by a long shot. 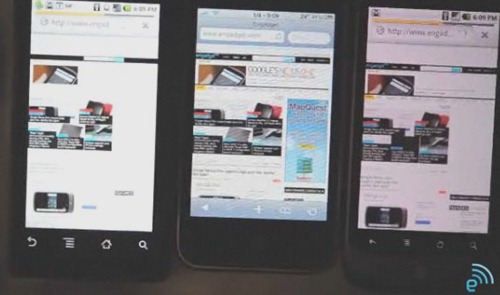 Check out the test in the video embedded below.

As you can see from the video above, both Nexus One and Droid took awful alot of time to complete the full page load when compared to iPhone 3GS. Nexus One in the end managed to load it up just before Droid did. Also worth noticing is the scrolling, which is much smoother on iPhone than it is on the other two handsets. This, combined with iPhone’s ability to support multitouch pinch-to-zoom gesture in the browser makes it an overall much better Internet browsing device than its rival Android devices.