The iPhone 5C, Apple’s first attempt at offering a budget device, is expected to be unveiled alongside the new flagship iPhone 5S at a special event to be held on September 10th, and we’ve seen many leaks and sightings of the polycarbonate-enclosed handset already. But today, via French blog Nowhererlse, an image has emerged of what is claimed to be the device packaged in its retail casing ahead of shipment.

Of course, this cannot be verified in any way, but Nowhereelse does have a pretty strong track record when it comes to accurate leaks. Moreover, if the device is, as expected, to be launched on September 10th with release shortly thereafter, Apple will already have prepared many batches of units ready for distribution, so the timing in particular gives a little legitimacy to this leak.

Then again, it does make us suspicious that the standard of camera used is below even what a mid-range smartphone is capable of churning out, and one would expect anybody with such an exclusive shot to share with the world could get a hold of a decent snapper. Also, with the same image leaking all over the Interwebs showing different colored devices, we’re inclined to think this one’s a fake, and in all honesty, not a very good one, just like the previous iPhone 5C packaging one.

Still, the iPhone 5C looks all set to take the industry by storm, and as well as being built for the purpose of helping Apple capitalize on the lucrative markets in developing nations like India and China, the device will also see the Cupertino’s brand of smartphone appeal to a wider audience in the likes of the US, UK and much of Europe. 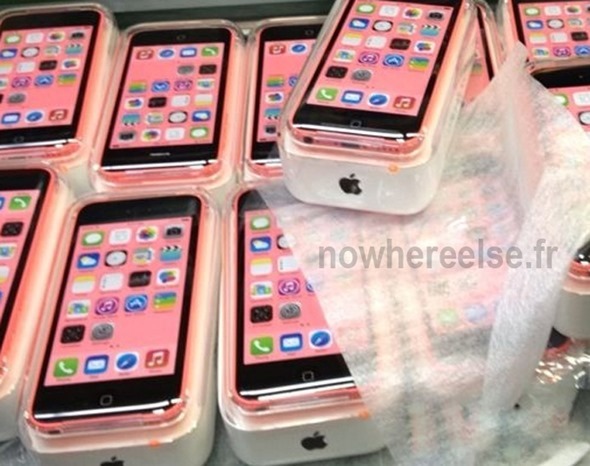 September 10th is the unofficially confirmed date of the announcement, and with less than two weeks to go, it won’t be too long before we can put the rumors to bed and finally get down to checking out the new models. The iPhone 5C is expected to offer five different colors, while the iPhone 5S, successor to the iPhone 5, gets the most attention, with a reported 12-megapixel camera, 128GB storage option, and the confirmed addition of the champagne gold color configuration.

We’ll keep you posted on any new developments, so stay tuned!