A new scam affecting Apple’s iOS devices has been discovered that attempts to prey on vulnerable users by displaying information contained in an official looking system level alert. The latest attempt at deceiving iPhone and iPad owners has so far reared its ugly head on devices located in the United Kingdom and United States and prompts users to call a supposedly toll free number in order to troubleshoot and fix the fabricated device issue.

This latest attempt at extorting money from unwitting users is definitely not one of the most sophisticated ones that we’ve seen over the years, but it arguably looks genuine enough to catapult some less savvy users into panic mode.

The official looking alert, which is presented in a native iOS alert housing, pops up randomly in Safari and attempts to convince the user that the device has crashed “due to a third party application in yourphone[sic]”. 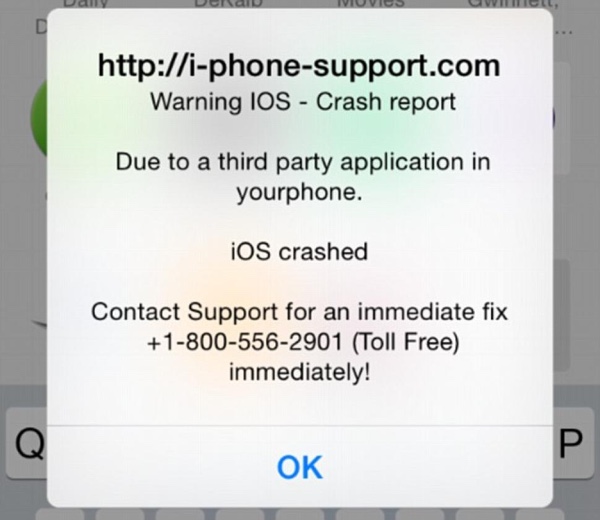 The less than official looking “i-phone-support.com” website address along with the questionable English structure and grammar should be enough to convince most users that this is a scam. However, history has proven time and time again on mobile and desktop that certain users will eat with panic when faced with this type of notification and will follow the offered instructions accordingly. The scam comes after calling the embedded telephone number where the caller is then asked to pay a varying fee to fix the fabricated issue.

Due to the nature of the alert, it can actually be avoided altogether by disabling pop-ups in the Safari preferences found within the native Settings app on the device. Visit Settings > Safari > Block –ups to toggle the preference ON or OFF.

Those who are already experiencing the issue will first need to enable Airplane Mode on the device followed by removing all history and website data from Safari to eradicate the problem. Once done, close Safari from multitasking switcher and disable Airplane mode.

A similar flaw like this was discovered a while back in the native iOS Mail app, where users were tricked into entering their iCloud credentials in a pop-up which looked strikingly legit. We’re sure we’ll hear something from Apple regarding today’s discovery promptly.