The MacBook range is iconic for a number of reasons, but the most differentiator between an Apple-made notebook and that of a rivaling brand is the famous, glowing logo on the rear of the case. For quite a while, iOS device users have wondered if something similar would ever grace the likes of the iPhone or iPad, and with the rumor mill currently awash with reports regarding the next-gen Apple smartphone, a new leak suggests that we may finally be getting our wish of an backlit logo with the iPhone 6.

It has been reported on several occasions recently that the new iPhone will finally pack a MacBook like glowing Apple logo on the rear, and with resident leaker Sonny Dickson having found the plastic cover of the iPhone 6’s Apple logo to be transparent enough to leak through some light, it’s now looking very likely that this will indeed be the case.

Given that it may also enhance coverage by allowing wireless signals to transmit through the hole in the largely aluminum back panel, it makes practical sense, too, and although we’ve seen hackers come through with solutions for those looking for a gleaming Apple logo on their current and past-gen iPhones, there efforts may be made redundant this time around.

Along with making the display considerably larger, we’re also expecting Apple to treat the iPhone 6 to NFC, and again, by keeping the Apple logo thin, signals would be able to flow through with much less effort, enhancing performance. 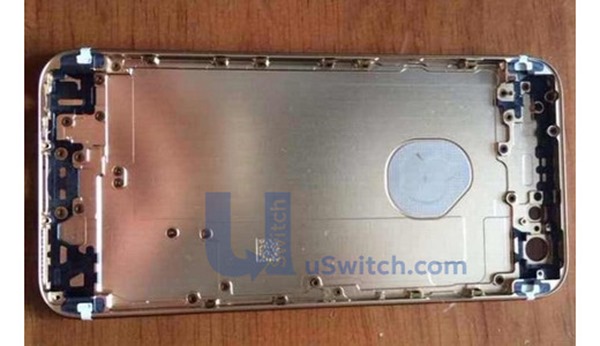 We’re getting new tidbits on the iPhone 6 on an almost hourly basis, but given that it has now apparently gone into manufacturing, expect less surprises from here on in. The 4.7-inch variant of the device was, the last we heard, still expected to arrive in September following an announcement earlier on in that month, and given that the past few iPhones have also been showcased and launched in September, this isn’t particularly surprising.

The more sizeable, 5.5-inch model is a little more elusive, with Apple having apparently hit some design issues that will see production delayed considerably. As such, the bigger iPhone mightn’t appear until the latter stages of the year, at which point, we may also see the Cupertino’s inaugural smartwatch effort in the form of the iWatch.

We’ve also got a better camera, faster processor and iOS 8 to look forward to, and with the iPad Air-like design finally departing from a form factor that has remained fairly constant since the iPhone 4, the iPhone 6 will almost certainly be the most significant release since that very device appeared back in 2010.

Would you like the iPhone 6 to pack a backlit Apple logo?