Verizon’s Motorola DROID brand is often confused with Google’s Android in general, especially amongst ‘normal’ people who don’t live and breathe smartphones like we do. If there was ever proof that wall-to-wall advertising does the job, it’s the way many people call any Android device a ‘DROID.’

We’ve been overdue a new DROID phone for a while now, and almost in an act of defiance both Motorola and Verizon have set the record straight today by launching not one, but three new smartphones carrying the DROID moniker. 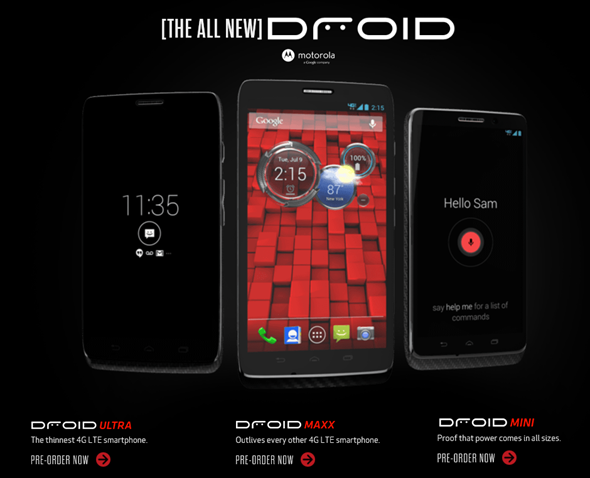 First off we have the DROID Ultra, a phone that Verizon is calling the thinnest 4G LTE smartphone currently available on the market. Weighing in at just 7.18mm, and packing a 5-inch HD display, the device will be available in either a black or red body. For some reason the handset reminds us ever so slightly of HTC’s One X smartphone from last year, which is no bad thing really. 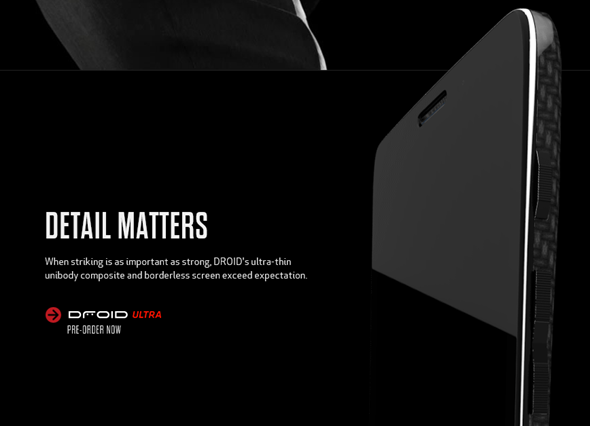 Costing $199 on contract, the Ultra sits in the middle of the three devices that have been announced today when it comes to price. 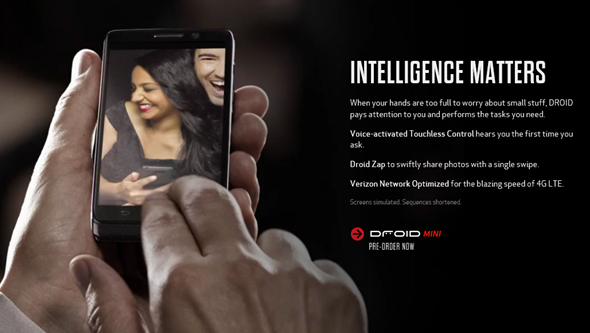 The bottom of the range is the DROID Mini. Priced at $99, again with a 2-year contract, this device offers a more compact design built around a 4.3-inch HD display. Most exciting here is the addition of wireless charging capabilities, whilst the software remains the same as the rest of the DROID lineup. More on that in a minute. 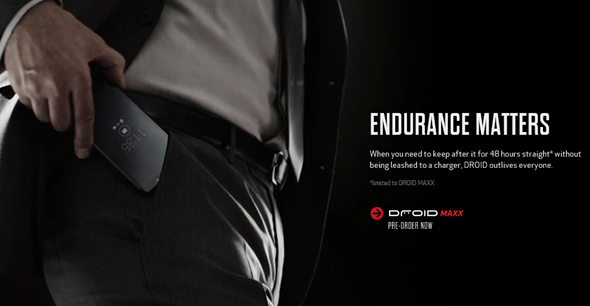 Finally we have the DROID MAXX, which is the device with the supercharged battery. Claiming to offer a full 48-hours from a charge, and has a monstrous 3,500 mAh battery, this device is meant for those that spend all their time away from a charger but also want to have a phone that does more than make calls and send a few text messages. Built of Kevlar and apparently 9% thinner than last year’s model, the MAXX is supposedly the longest lasting 4G phone available.

All three phones feature some new software features, including a new Quick Capture option for taking pictures in a hurry and DROID Zap, allowing the throwing of images to anyone within 300 feet of you, should the need arise. If you’re willing to go completely hands-free, simply say ‘OK Google Now’ and your DROID is all ready to take voice commands, yes, without touching your phone.

All of the new range will be made available from August 20th, with pre-orders starting today. There’s no word yet on what version of Android these new phones will feature, but with Motorola now being part of Google, we’d like to think it would be closer to the bleeding edge than not. You can pre-order your handset by heading over to: DROIDdoes.com