As Apple and Samsung’s legal teams gear themselves up for another hard day in court, we sit patiently to see what little gems of information are next on the agenda to be released into the public domain. We have already seen Apple reveal prototype design information about the design iterations they went through in the early iPhone and iPad development stages, as well as a testimony from Phil Schiller and Scott Fortstall about how the company actually decided to design and build the two mobile devices.

Before the trial even started in California, it became pretty public information that Apple were ultimately seeking to gain over $2 billion in damages from Samsung. As part of the legal process, the company representatives may go about protecting their patents and ensure that the integrity of their brand and products aren’t tarnished, but when we get down to the real crux of the issue, it ultimately boils down to wanting financial recompense.

So is the $2.5 billion figure that is being thrown around accurate, or is Apple actually seeking a monetary amount that is totally different to the rumored value? Thanks to recently filed documents in court, we can actually take an accurate peek into exactly what Apple is hoping to achieve by the end of these proceedings, broken down on a per-device scale. As part of this legal process, Apple have employed the services of the Invotex Group who specialize producing accounting reports for litigation cases just like this. As you might expect when you consider the size of the case at hand, Apple and Invotex have covered all angles with the filed documents covering four different scenarios, with the worst case actually exceeding the speculated $2.5 billion and topping out at closer to $2.9 billion. 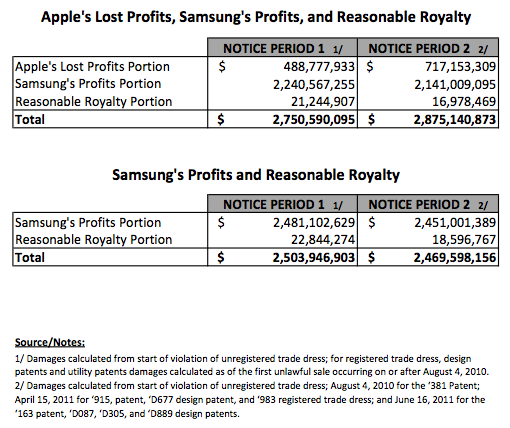 One of the included charts in the document, given the title Samsung Accused Products Vs. Apple’s Asserted Intellectual Property, provides a list of twenty eight Samsung devices that they feel have infringed on their patents with the latter sections of the table outlining which patent numbers the Cupertino company feel have been violated. The document also carries on to break down just how much Apple feels each of the twenty eight Samsung devices have cost them when taking into account their lost profits, Samsung’s profits from design and trade dress as well as any reasonably expected royalties.

It remains to be seen if the document resonates with judge Lucy Koh and the overseeing selected jury, but one thing it most definitely does show is that Apple is seriously determined to extract a large payout from Samsung as an outcome of the ongoing trial.