Next iPhone’s Taller 640×1136 Display All But Confirmed, Thanks To iOS 6’s Resolution Scaling [SCREENSHOT]

If you are one of the many who religiously follow the release of any iOS device and are sitting patiently waiting for Apple to announce the next-generation iPhone, then it has been pretty much agreed upon that you don’t need to wait much longer. It is widely expected that the Apple media event that is planned for September 12th will be iPhone-centric and possibly introduce the new device for sale approximately nine days later.

With Apple pushing out the fourth beta of iOS 6 to developers yesterday, the new iPhone will more than likely be the first device that actually ships with the next major build of iOS pre-installed on it, but if we have learned anything from history; it is that if Apple does announce the iPhone next month, then they will more than likely flip the switch on a public iOS 6 launch the same day. There’s no doubt that iOS 6 will being great features to existing hardware, but what about those who are actually planning on purchasing or upgrading to the new iPhone?

One of the biggest areas of discussion about the sixth-generation iPhone is the purported larger display which Apple is set to introduce to compete with current smartphones that offer more screen real-estate to users. The physical size of the iPhone display has remained consistent since the original iPhone, and rumor has it that the next release will boast a 640×1136 resolution display thanks to a larger vertical dimension. Thanks to some clever trickery with the iOS simulator within Apple’s Xcode development environment, it has been proven that Apple has been testing our their software with larger display devices. 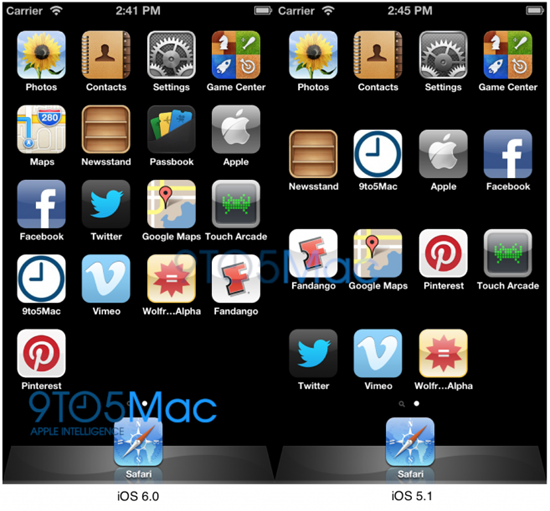 Those involved with the tinkering have managed to tweak the simulator tool to run at the 640×1136 resolution which is believed to be the next iPhone’s native screen resolution. Tests were carried out with both the latest public release of iOS as well as a beta version of iOS 6, with some extremely interesting results. When running iOS 5.1, the simulator increases the space between app icon rows to symmetrically law out the existing four ways on the larger display. When running on the beta of iOS 6, an additional row of icons is added to the display showing that iOS 6 has internal logic for a new user-interface layout on a bigger device.

While the finding is extremely interesting and does raise some additional questions, it doesn’t exactly provide us with concrete proof that the next-generation iPhone will ship with the reported larger display. It does at least show that Apple has put the wheels in motion on producing larger display devices in this range.