Apple said at the time that the new high-end notebook was notably faster than the previous machine when carrying out a number of tasks, and new Geekbench scores appear to back that up.

Benchmarks that have started to be uploaded to the Benchmark website show the new 15-inch MacBook Pro with a 2.4GHz Core i9 CPU that scored a single core score of 5919 and a multi-core result of 31728.

Comparatively, the previous high-end 6-core MacBook Pro from 2018 was able to manage a single-core result of 5348 and a multi-core score of 22620.

Those are some impressive speed increases, especially in the world of multi-core operations that see an increase of almost 30%. Apple had previously said that the new computer was capable of up to 40% speed improvements over the older model. 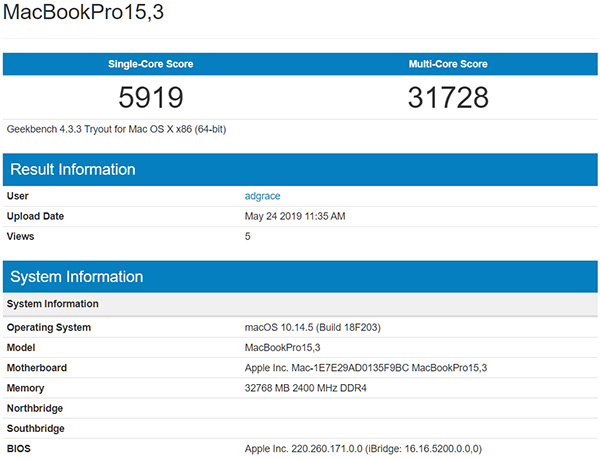 The notebook tested isn’t the standard 15-inch MacBook Pro, however. The chip tested in this Geekbench result is a $200 upgrade on the standard 2.3GHz 8-core 9th-generation Core i9 CPU. Whether that expense is worth it to you will depend on the workflows you use, but if the best of the best is something you need, this is the MacBook Pro for you.

Potential buyers can place their orders online from the Apple Store and retail stores will start to see them appearing in-store within the next few days.