Apple today released a new wave of MacBook Pro 13-inch and 15-inch notebooks, with the 15-inch model being the first to be powered by an 8-core Intel CPU, while the 13-inch model receives a quad-core CPU upgrade.

The 8-core chip on the new 15-inch Macbook Pro make for a machine that’s 40% faster than the 6-core alternative, and twice as fast as the quad-core one.

While those speed improvements will no doubt be very dependent on the software and workflows used by professionals, the speed increases are more than notable with the new 8th and 9th-generation Intel Core processors that are being used.

“Now with 8-core processors for an incredible performance boost, along with its stunning Retina display, fast storage, all-day battery life and running macOS, MacBook Pro continues to be the world’s best pro notebook and we can’t wait to get it into our customer’s hands to see what they do next.”

While new, faster notebooks are always welcome, the biggest change for most people here will be the inclusion of a revised Butterfly keyboard. The MacBook lineup as a whole has been plagued by failing keyboards and stuck keys for years at this point, and Apple has so far been unable to find a fix. 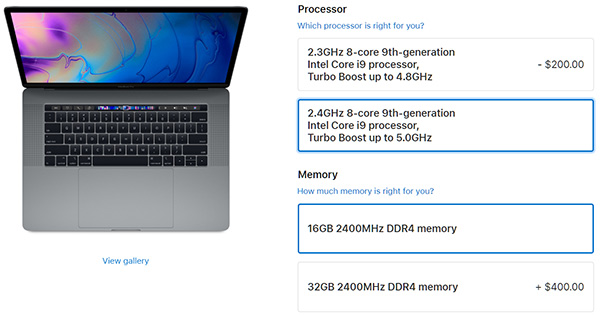 With this new version, The Verge reports that “new materials” are being used although Apple isn’t saying what that actually means.

Apple says that it is using “new materials” in the switch mechanism that should significantly reduce the occurrence of double and missed key presses. It will ship on the new MacBook Pro 15-inch and MacBook Pro 13-inch with Touch Bar that it just announced.

The company had no announcements on whether it would use this “new material” on other MacBooks it sells going forward.

The current state of Apple’s MacBook keyboards as a whole is so poor that it’s been difficult to recommend anyone pick up one of Apple’s notebooks at all. This new revision may rectify that for the MacBook Pro, but we’ll have to wait and see how that pans out once people spend weeks and months with them. We’re not sure we’d be willing to be the people testing that keyboard however, especially considering the money needed to get into one.