I know you’re thinking that every time you open Cydia and refresh the repositories; there is another tweak added which offers a set of custom commands for Siri. Well, to be honest; you would be right in thinking that, but that doesn’t mean that another player in the game can’t offer some additional goodies.

The developers Andrea Oliva and Akhil Tolani describe the MyAssistant tweak as being Siri, just as the user wants it. I’m pretty sure that developers of any previous Siri-related tweaks would also say the same thing, so what makes MyAssistant different? Well for a start, the tweak is considerably more in-depth than any other options available, and offers a multitude of options which gives power to the user.

MyAssistant offers the powerful ability of being able to hook into Activator events, which means that any Activator feature can be accessed through the power of voice commands with Siri. MyAssistant also offers what has become the standard SBSettings toggles such as being able to use voice commands to toggle system options such as Wi-Fi, 3G data, cellular data, Bluetooth, Location services, Airplane mode and Brightness on or off. 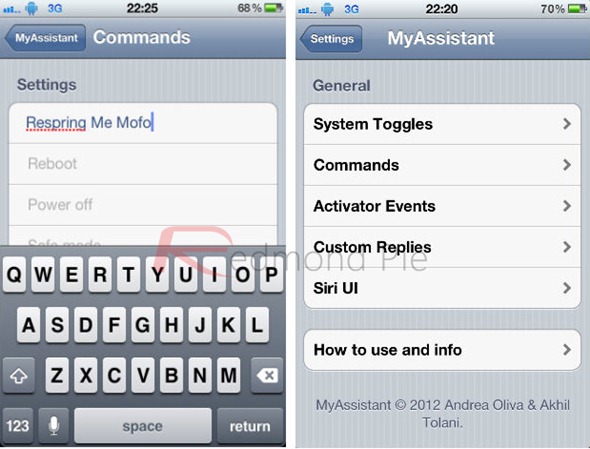 One of the more appealing aspects of the tweak from my point of view is the ability to add commands to the voice analysis software to accomplish things like powering the device down, performing a respring or reboot, putting the handset into safe mode and even lock or unlock the iPhone as well as check the percentage of battery remaining. It seems as if the developers of this tweak have certainly considered all options in the pursuit to make MyAssistant as versatile as possible.

The MyAssistant tweak also comes with an additional settings panel which lets users set custom answers to any question that may be asked to Siri. As an example of this, If I asked Siri which mobile operating system is the best, I could set Siri to answer ‘Why, it is iOS of course’ – you get the picture. 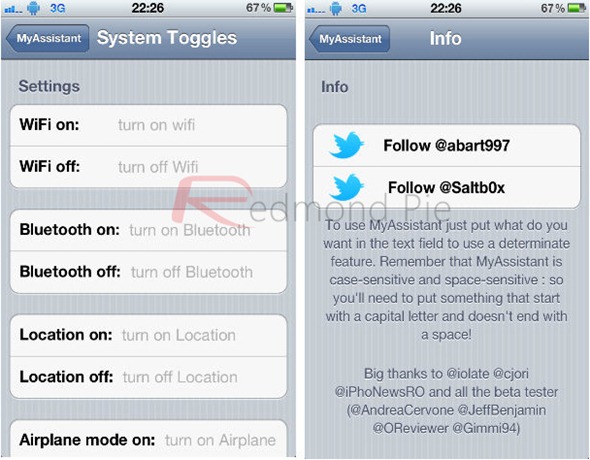 All of that for just $0.99, sounds like a great deal doesn’t it? Well yes, it is. But there is more. As a final feature you can also select a custom background for Siri by using any photograph from your photo album saved on your device. This is a small feature, but adds to the power of MyAssistant and gives an extra dimension which hasn’t been implemented in any other Siri modification.

MyAssistant is available now through the BigBoss repository for $0.99, requires iOS 5 or above and works with any device which has Siri capabilities; which means it should also work on an iPhone 4 running Siri through the Spire tweak.