MultiNoteDelete Lets You Delete Multiple Notes At Once On iPhone, iPad In Notes App [Jailbreak Tweak]

A feature that has been built into iOS since its very inception in 2007 has been the Notes app, which although rudimentary, has been used by many as a simple and reliable word processor. Despite its many strong points, it has one major usability flaw: wondering what it is? Read on. 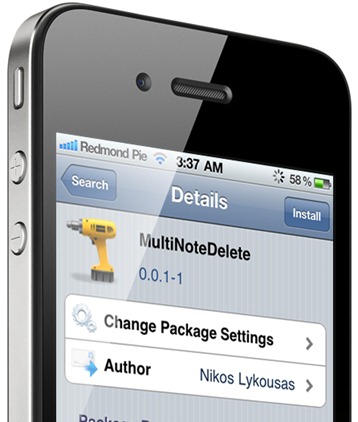 Slightly after iOS was introduced, Apple as well as several other third-party apps made it easy to remove several items at once from a list view, by simply clicking on an “Edit” (or equivalent) button, selecting all the items desired for deletion and tapping on a button to get rid of them forever. Notes has always had a list view for managing different annotations, yet no mass delete feature has been implemented as of yet.

MultiNoteDelete is a new jailbreak tweak that attempts to fill this gap by adding a mass delete feature right into Notes’ list view. Using the method we described above, it’s now easier than ever to permanently remove multiple notes at once, as you can tell from the image below. 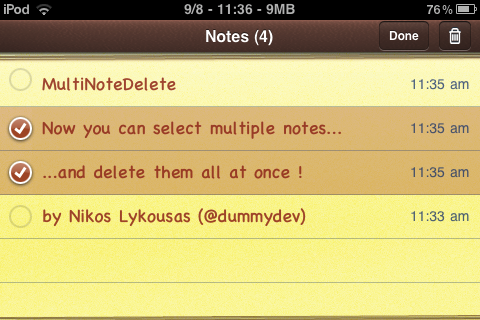 In order to install this tweak, you first must jailbreak your iPhone, iPod touch or iPad. You can follow our step by step guide posted here to jailbreak your iPhone, iPad or iPod touch on iOS 4.3.5 using Redsn0w (or PwnageTool), or on iOS 4.3.3 using Redsn0w, PwnageTool, Sn0wbreeze & JailbreakMe (that last one being the easiest). Before going on, make sure you’re familiar with basic diagnostic tasks in iOS devices, like entering DFU mode as well performing a restore through iTunes, in case anything doesn’t go as planned.

There’s no indication on which version of iOS this tweak is designed to work, but it should be able to operate on any version above, and including, 4.0. This tweak works as advertised and does nothing more than what it’s supposed to do, therefore it doesn’t add any icon to the home screen nor does it change the iOS user experience in any way whatsoever.

MultiNoteDelete can be installed on Cydia from the BigBoss repo, which should be listed by default. From within Cydia, just search for “MultiNoteDelete” and install the first result. The price you ask? Free!