Microsoft Surface RT Is The Perfect Family Tablet, Thanks To The True Multiple User Accounts Support In Windows RT

Microsoft’s Surface RT will hit the retail market tomorrow, and with Apple having just made quite a few changes and improvements to the iPad range yesterday, comparisons are naturally going to be drawn. While the form factor, tech specs and software have been compared on numerous occasions, one of the key aspects specific to the new Microsoft tablet is that of the multiple-user accounts support in Windows RT.

Some may see it as a relatively minor implementation, but by allowing numerous users to implement their own settings, store their own files and apps, and select their own themes, it automatically renders itself as a device to be used by more than one person – a family device. Of all the different Android based tablets and iPads available today, Surface RT, at the moment at least, is the only mainstream tablet with true support for multiple user accounts.

The iPad is a strong brand, and by already being on its fourth iteration, many consumers have familiarized themselves with the larger-than-life iOS device. But no matter how sharp the display, or how much power it packs, the fact remains that it’s a personal device – like a smartphone – and rarely do people share an iPad amongst themselves.

Of course, there are those people who can happily use an iPad along with siblings or friends within the same household, but plenty of compromise still has to be made in order for such an arrangement to work. Can five people possibly agree upon which music or apps should be downloaded onto the device? In terms of music, separate playlists can combat the issue, but since apps on iOS cannot be bookmarked for shortcuts in various folders, separate folders for each user would simply not work. Same goes for pictures and files on the device.

Surface RT scores big time here. By giving users the ability to have separate accounts, it makes a great case for itself to be used as a tablet which can be easily shared among family and friends. There is a Guest Account option too, for situations where you may want to lend the device to someone, and don’t want them to mess with your files or settings. I was surprised at how almost all of the early Surface RT reviews published on the web have overlooked this feature of Windows RT.

For Microsoft, it’s a pretty significant area moving forward, and as the Surface RT tries its level best to grab a chunk of Apple’s pie in the tablet field, multiple-user account support could be a real pull factor for the Redmond creation. With most high-end tablets offering a great HD display, fast processor and smooth interface, the Great Tablet War is going to, in my opinion, consist of numerous small battles as opposed to one or two overtly "selling" features. 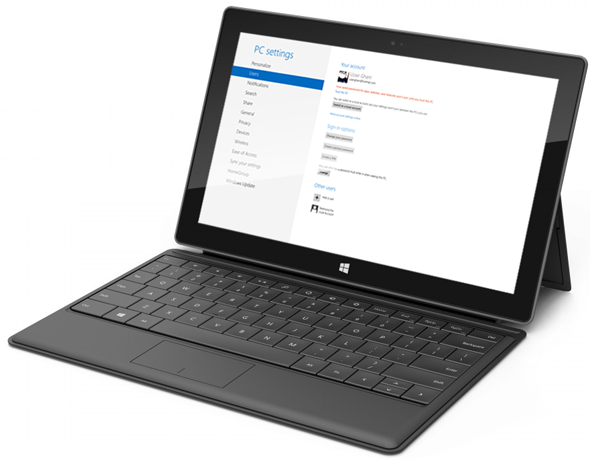 Is multi-user account support one of those battlegrounds? Well, I would say yes, and as families begin to recognize the shared nature of the Surface, things could get very interesting indeed.

What’s your take on the matter?