Microsoft has kicked off an ad campaign featuring Bing’s new Facebook integration functionality. This feature allows users to visualize on the fly how many of their Facebook friends “like” a particular search result. This is yet another way that, according to Microsoft, will let you ‘Bing & Decide’. Stay tuned for videos below. 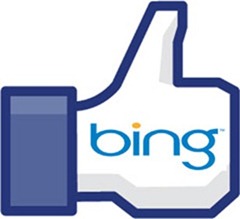 Bing introduced social search earlier this week, as part of a long-term effort to make customers look at Bing as a “decision engine”, more than just a typical search engine. That effort began ever since the service launched in 2009, after its predecessor, Windows Live Search was put to rest. Ads depicted the effects of “information overload” on traditional search engines and how Bing would help streamline the results.

Fast-forward to today, Microsoft’s decision engine enjoyed a 14.1% US market share in April, compared to Google’s still larger 65.4%. Although still modest, the search engine actually has a sizable amount of users, unlike its predecessor, Windows Live Search. That’s not counting with the market share Microsoft is getting from Yahoo!, which signed a search deal with the company two years ago. As part of that deal, Microsoft was allowed to implement Bing onto Yahoo’s services. In exchange, Yahoo! took over Microsoft’s ad business. That deal generated a lot of controversy, but it was necessary according to many, since it helped rescue a struggling service, while helping an up-and-coming one. The combined market share of both search sites, which are now powered by Bing!, stood at a respectable 30% in April.

Microsoft’s efforts weren’t left unnoticed by its competitors, including Google. The Mountain View-based company felt compelled to change its search page for the first time in almost a decade, by adding a new sidebar with additional search options, much like Bing. Google also kicked off its first serious Google Search TV and web campaign, making the point that Google Search also allowed elaborate searches, similar to Bing’s “decision engine”. The company has also added smarter search features since then, including real time Twitter search.

Even though Google is still a clear winner in this space, Microsoft managed to do something others had never succeeded at doing: create a viable #2, thanks to the deal with Yahoo, and more importantly, cause Google to actually respond. And even though Google has introduced a similar “social search” feature earlier this year, showing which Twitter friends had shared a specific search result, Microsoft is proving over and over again it’s capable of reacting fast and being a real competitor in this space, appreciated by users beyond the company’s core following.