The ALS challenge is something that we told you about earlier today when Apple’s VP of Worldwide Marketing took his ice cold water like a man and then nominated CEO Tim Cook to do the same. Well, meanwhile over on the other side of the PC war ex-Microsoft CEO and generally nice man Bill Gates has also been in on the act after Facebook CEO and founder Mark Zuckerberg nominated him during his own dousing.

But, with this being Bill Gates and not your average genius, he set about turning the whole affair into a comedic video that not only goes to show that the brains behind Microsoft still has a great sense of humor, but that the people who run, or at least used to run Silicon Valley are just like the rest of us after all. 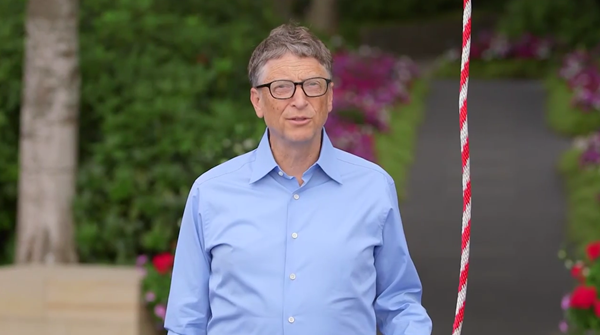 Challenged to dump a bucket of ice cold water all over himself, Gates declined to go the usual route of upending a bucket as such, instead devising a system that end up with the former richest man on the planet simply pulling a cord like a gentleman.

Of course, the end result is still the same: Bill Gates gets covered in water and, we suspect, the ALS campaign gets a sizeable sum of money for its good course. Really, there’s not a lot to not like here.

The current ALS campaign currently has technology’s bigwigs challenging each other to get a drenching or make a donation to the charity with either option having to be carried out within 24 hours of the challenge being made. Obviously these CEOs are making donations as well as plumping for the cold looking water treatment, but why not have a little fun while you’re writing the check?

Gates is in good company too, with the likes of Tim Cook, Phil Schiller, Satya Nadella and the Zuck having already gone through the ritual. Here’s hoping plenty of money has gone to charity, too.

Check out the video down below for some pure entertainment, and be sure to leave your thoughts in the comments section below.