Samsung is well-known for its extravagantly-dealt marketing budget, and the company’s ubiquitous logo is fairly hard to avoid no matter where you go. With the flagship Galaxy S5 having just been released, Sammy is naturally trying to push its latest humdinger into everybody’s faces, and as a part of this concerted push, London’s Heathrow Airport Terminal 5 will be renamed “Terminal Samsung Galaxy S5” for two whole weeks. Yes, really.

As of Monday, the terminal will be littered with advertising and signs leaving every passenger under no illusions as to what Samsung’s latest smartphone is called, or what it looks like. As well as plastering every corner in ads, the signs and digital displays will also be altered to promote the S5, which finally released early last month after its Mobile World Congress announcement, and although Samsung’s UK marketing VP describes the marketing stint as chance for the company to “push the boundaries” in unprecedented fashion, those with an affinity to a different brand of smartphone will surely find the oft-arduous task of flying even less enjoyable. 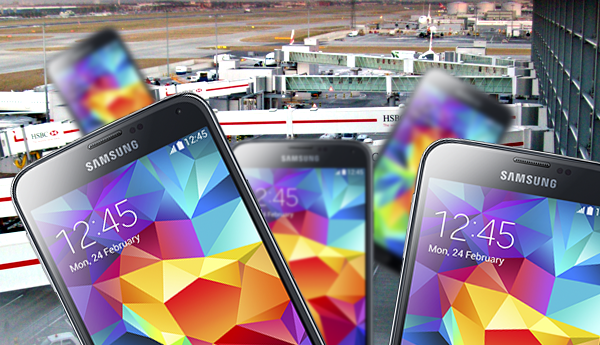 To clarify, Samsung hasn’t actually bought any renaming rights, so those, for example, taking the London Underground to the airport will continue to hear the terminal referred to under its usual moniker over the tannoy. What Samsung has secured, however, is an ad campaign that – even by its own standards – blows most other such efforts out of the water. Heathrow is one of the busiest airports in the world, and Terminal 5 is particularly lively, so it works out nicely for Samsung that it just so happens to share a name reflective of its most recent major export.

When the Galaxy S5 was first showcased at the MWC back in February, reaction was mixed. With so many rumors circulating in the run-up that Samsung would finally ditch the plastic finish for something a tad more premium, many were disappointed to see that the company had stuck to its guns, and after the iPhone 5s, adding a gold color option and fingerprint sensor was never going to have us jumping out of our seats.

To its credit, though, Samsung has certainly worked some magic, and following a record opening weekend for any of its top-end handsets, has also been the subject of rave reviews thanks to its incredible display and camera.

So, if you do happen to be passing through Heathrow T5 in the next fortnight, you have been warned.