A couple of days back, we reported on the news that a dev by the name of "clrokr" had discovered a jailbreak, which allowed the Windows RT operating system to run unsigned, ARM-based desktop apps. No more than a few hours later, the Redmond company responded to assure owners of RT tablets that there was no imminent security threat, and that a patch would be available within a couple of days. To add an interesting twist to proceedings, though, another developer has chimed in with a tool making the jailbreaking process one of automated ease, and as is nearly always the case with Windows Phone / Android modding breakthroughs, this one arrives courtesy of XDA-Developers.

The guy behind this modified jailbreak operates under the handle "netham45" and has released the batch file of the exploit. In order to jailbreak Windows RT devices, it alters a key area of the Windows RT kernel, allowing unsigned apps to run in an instance which would otherwise have been impossible.

In a contrasting manner to which Apple responds to the jailbreaking of its range of iOS devices, Microsoft offered a little praise of the "ingenuity" of clrokr to find the exploit and successfully execute unsigned code. As we already know, the jailbreak is tethered in nature, which means the break needs to be applied every time the Windows RT tablet is booted up.

A tethered jailbreak is something many iOS users will be more than familiar with, and although it’s always better as an option than no jailbreak at all, the freedom gained by allowing your device to run unsigned apps and tweaks forgoes, to a degree, the freedom to turn your device off and on at will. 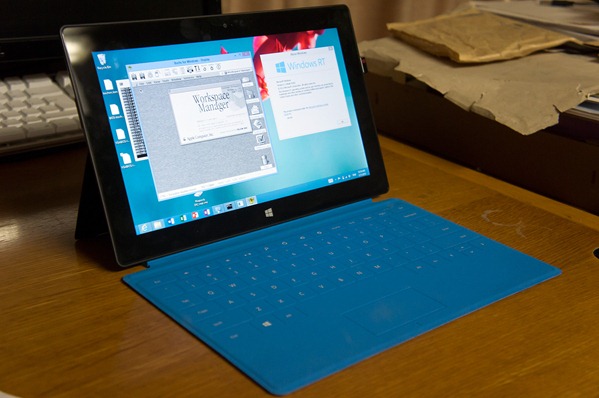 So, in the space of a few days, a jailbreak has been found, Microsoft has vowed to plug it, and as usual, an XDA-Developer member has piped up with an improved jailbreak tool. Essentially, the new tool does the same thing as the original in terms of jailbreaking, but provides a handy all-in-one utility, which in turn makes things rather easier to understand.